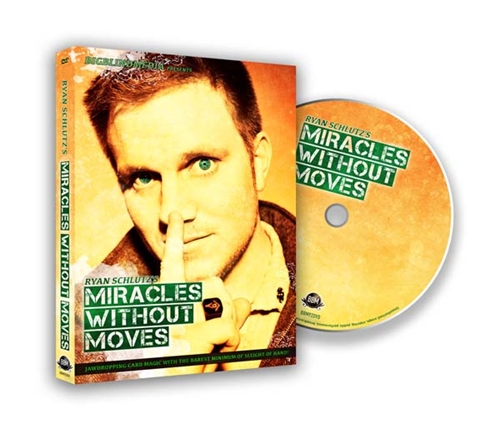 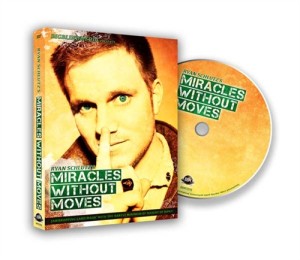 The first time I came across Ryan Schultz was his contribution to the excellent Ultimate Self-Working Card Tricks Vol 2 (which by the way is well worth watching…).  He is clearly a talented guy so I was looking forward to settling down with his new DVD – Miracles Without Moves.

Let’s run through the routines on the disk first.

– a very clean looking card location using a principle that is so old that you may never have come across it before – making it delightfully new again!  Ingenious!

– this completely fried me when I watched it for the first time – an incredible location of 4 of a kind which looks SO clean.   It is all achieved with a little bit of set up and a lot of sneakery (have I just invented a new word?!).  This is very strong indeed.

– another one which fooled me badly when I watched it first time – a very clever pseudo mind-reading effect – the spectator seems to only think of a card and you can reveal it.  This is extremely clean with some neat subtleties in the handling.  But you will need some confidence as a performer to do this one well.

– this is a nice presentational approach which combines two already strong effects from Bannon/Aronson into a completely impossible miracle.  You cleanly predict the outcome of a very random set of decisions made by the spectator.  There’s a fair bit of one time set up for this and a bit of set up each time you perform it but the strong effect more than justifies this.  There are no moves as such, but it does require a bit of thinking as you perform it though I suspect after a few performances this will be second nature.  But be warned – you might still not understand how it works!

– from a freely shuffled and cut pack you successfully reveal three cards.  This is a neat little thing.   It isn’t the strongest effect on the disk, but because it can be done with a borrowed and shuffled deck, that gives it extra points.  I could see this being a useful weapon in the impromptu armoury.

– a three phase routine with increasingly impossible locations of a card from a random bunch of cards previously selected and shuffled by the spectator.  It’s hard to know whether to call the ‘moves’ in this ‘moves’ or not.  This was probably my least favourite routine on the disk but it is still effective and would fry a spectator.

– another very fair-looking location of a card in a well mixed deck.  You don’t even need to look at the cards and yet can still find their selection.

So what do we think?

There is some great material on this disk – really strong effects with minimal ‘work’.  There are some principles here you might well re-use in your own ideas, but almost all of the routines are very strong in themselves.  I’m fairly sure that being a ‘magician fooler’ is not a particularly useful measure in evaluating magic – but it is fair to say that a lot of the stuff on here will fool magicians (who haven’t seen the disk!) too.

As ever, there are helpful explanatory comments from Liam Montier who has a real knack for asking the questions you might just have.  There are also some really poor jokes from James Went… And Ryan himself comes across as a really nice guy.

The title is ever so slightly misleading since the routines are not entirely without moves – but they are certainly not complicated finger flinging effects.  And from a technical standpoint anyone should be able to do these pretty easily.  To perform them well is another story.  But it always is.

There are lots of onscreen credits for sources which I always appreciate.  I also enjoyed the onscreen apologies and corrections.  They appeal to my sense of humour.  Make of that what you will.

Definitely recommended.  Release date is 19th August.  Available from Merchant of Magic (with thanks to BBM who kindly provided the review copy).