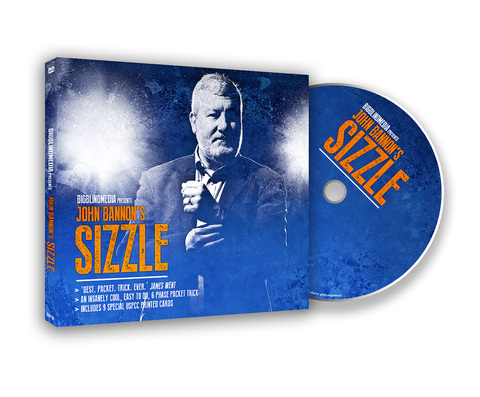 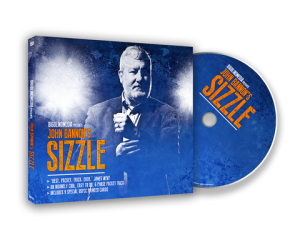 As you might expect, ever since I heard that John Bannon had put out a new packet trick I have been salivating quietly into my Bicycle cards – and on its arrival Sizzle didn’t fail to please. It’s a six (yes SIX) phase effect where a set of jokers repeatedly change back-colour – finally leaving a set of different coloured backed cards which make a royal flush!

For those of you that like the history (and I’m in that category) it is probably apparent that this is a distant cousin of Alex Elmsley’s classic Dazzle (which can be found in his sadly out of print Collected Works Vol 2 – or is taught on The Tahoe Sessions Vol 1 DVD). But as Liam Montier says Sizzle is like “Dazzle on steroids.” Bannon has done his usual job of clever routining and structuring to remove most of the moves, and leave you ending clean – putting it much more into the orbit of most magicians.

Sizzle comes with all the necessary Bicycle cards you need to perform the effect and a DVD to teach you. The DVD is nicely produced and easy to navigate. It has a few performances – although I would say none count as ‘truly’ live – which for me means with normal people in a non-studio location. This isn’t a major gripe, and the reaction of the muggle girls (!) on the final studio performance is suitably impressive – but it would be wouldn’t it?!

One thing I really like about the teaching on the DVD is that there is a ‘Magician’s explanation’ as well as a more detailed explanation. I really appreciated this since it cuts you to the chase if you already know the component moves. Within just a few minutes I understood the routine. Liam Montier does a great job of explaining everything clearly – and in the more detailed explanation takes you through all the moves on the way.

There is also a third explanation called the bullet point explanation (which BBM have introduced on a few of their recent DVDs) which is an even more compressed explanation – ideal for practicing with or refreshing your memory. Atmosphere is added by a spooky shadow on the left hand side of the screen! One thing I would have really liked to see here is a very quick explanation of the setup/stack at the start of this. There is a separate set up section but this also introduces all the cards and is ever so slightly more laboured than it would need to be if, for instance, I was coming back to refresh my memory on the trick after a while. But again, this is a minor quibble.

There is also a slightly different handling given which some may prefer.

The DVD includes a bonus effect called Banhilation. This is a self-working full deck prediction effect. It didn’t rock my world, but as you would expect with Bannon there are some nice little subtleties as he works with a principle you almost certainly know. Not to be sniffed at, but I’ve seen better bonuses!

The final elements of the DVD are separate explanations of the different counts used in the effect – this time taught by Bannnon rather than Montier. I think Liam’s explanations are easier to follow, but these have the advantage of being easily located on the DVD.

All in all this is a great little trick. An enormous amount of magic takes place with cards changing colour and value multiple times. It is not difficult to do and ends beautifully clean. I’m not sure I would use it when gigging since reset would take a moment or two longer than can sometimes be afforded in the real world, but a great one-off trick to have in your pocket.

Highly recommended and available from Merchant of Magic (with thanks to BBM who kindly provided our review copy) for £17.99.