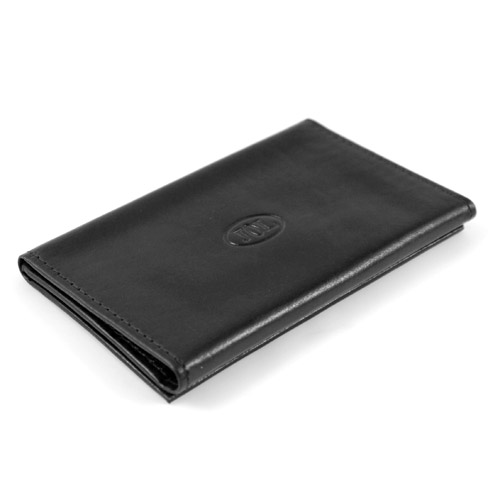 If you’ve been card around magic for any length of time, the chances are you’ll have heard of the Jerry O’Connell Plus Wallet – widely considered the best card to wallet on the market. But it occurred to us that many folk may not realise that the Jerry O’Connell range is actually much larger than that – comprising of accessories (like Packet Trick Holders, Coin Purses, Deck Holders, and even Fork or Scissor holders!) as well as a good number of other kinds of gimmicked wallets (e.g. Himbers, Himber Peeks, ShoGuns) and even a Mentalist’s (switch) Pad. 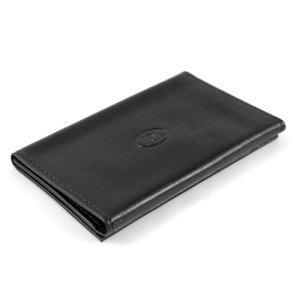 We thought we’d draw your attention to two which deserve to be more widely known. The first is the Jaks Wallet. This is a very clever (yet simple) peak wallet which looks like the kind of holder you would keep your business cards in. To my mind this makes it a very powerful tool for that moment you want to demonstrate some kind of mind reading on the fly.

As with all JO’C products this is beautifully made. A nice quality of leather, beautifully stitched – it looks, feels and even smells the part (is it only me that likes sniffing leather?!). You can remove a business card from the ‘wallet’, have the spectator write on it, place it back in the ‘wallet’ and then easily get a glimpse whenever you need to.

The ‘wallet’ comes nicely presented in an attractive cardboard box and a link is provided to a web-page where you can find both written and video instructions. There is more than enough detail to get you up and running with the wallet very quickly.

There are plenty of sophisticated peak devices and wallets out there, but for me, this one wins on simplicity (nothing to break, easy handling) and innocence – it really is exactly the sort of thing you would carry your business cards around in. The proportions are slightly larger than a standard UK business card – so there is plenty of room – and the peak enables you to see the whole area of the business card.

I think this will be in my pocket permanently now – just in case someone asks to see a little something. Even if you don’t do much mentalism or mind-reading this would be a perfect ‘impromptu’ effect for any kind of magician – and gives you an excuse to leave your business card with the spectator which is always a bonus! Recommended. Available direct from PropDog £29.99 (at time of writing).

The Small No Palm Wallet 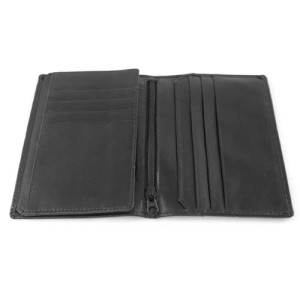 Second on our list today is the Small No Palm Wallet. Some people are put off the classic card-to-wallet effect since they are worried about palming a card. You won’t be surprised to hear that is where this one comes in. It really does what it says on the tin – enabling you to load a card into the wallet directly off the top of the deck, without needing to do any palming.

Again, the wallet is beautifully made and smells great! It is a ‘tri-fold’ wallet with a number of pockets for credit cards, some for notes (these are quite small – but you can just fit a £10 note in them), a window compartment in the middle and a zippered compartment – which is where the loaded card ends up. In real life I tend to carry my wallet in my side trouser pocket. This wouldn’t really fit in there. It does go completely in my jeans back pocket, but I think for me will most naturally live in my jacket pocket – which is fine when I’m performing since I always have a jacket on.

It isn’t quite as versatile as its bigger older brother – for example you can’t use envelopes with it. But with a bit of creativity other effects are possible – for example could be used to subtlely add a small stock of cards to a deck, or could even be used in ‘reverse’ as a sort of peek?

Like all these sorts of things you will have to practise a bit to get the handling smooth. There are downloadable instructions which outline the basic method and a few ideas for other routines – but I’m sure you’ll soon come up with your own.

This is a great little wallet and ideal for anyone wanting to perform the classic card in wallet without needing to be frightened of palming! It also works out at less than half the cost of its more sophisticated big brother. Only £40 (at time of writing) and available direct from PropDog.

(Review samples for this feature kindly provided by PropDog)