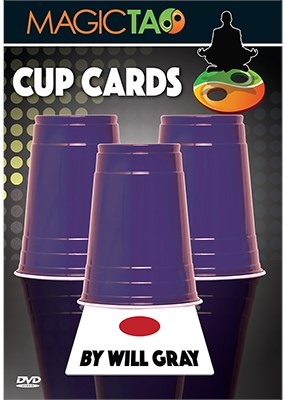 Cup Cards is a fantastic bit of lateral thinking – applying the cups and balls plot to a packet trick. Will Gray credits others (notably Bannon and Francis) who have played with this idea – but this is his routine and here’s our Cup Cards review. 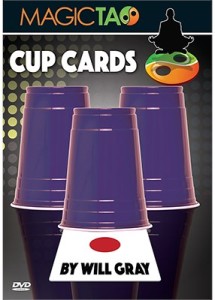 Using playing cards printed with blue cups and a single red ball, the ball card repeatedly jumps back to the pocket even after being fairly removed. As a final phase all the cups are replaced by assorted vegetables (a la the final loads in a conventional cups and balls routine) including a classic gag to finish!

You get all the necessary cards, including a spare blank card for an alternative ending. The cards handle fine and the photographic printing for the final loads is really good. The cup graphic is a little basic with the ‘highlight’ almost appearing like a misprint, but this is easily overlooked.

My biggest criticism is the printing of the backs of the cards. These are solid colour red or blue backs with a white border – but unfortunately (on my set at least) the borders were quite uneven on different cards. This isn’t a deal breaker by any means – and will probably fly by a spectator (in spite of the move used in the routine) – but it would have been nice for a bit more consistency here. They also feel just a trifle thick – which in the initial packet makes the Elmsley count a little harder. Again, this isn’t a deal breaker, but slightly thinner card stock might have made the first count or two less bold.

You also receive a DVD which contains a couple of performances (one live – hurrah – and one studio), a section on set up, an explanation, an extra ‘runthrough’ for practising purposes – taking you through the moves quickly firstly with minimal explanation and then a second time without any explanation – and a brief explanation of the Elmsley count (which is the only ‘move’ required). Teaching is clear and at a sensible pace. It is no longer than it needs to be but says everything necessary. I found the runthrough section really helpful for getting the routine firmly in my head.

Cup Cards is a fantastic little effect. The routine is very easy to do (if you can do an Elmsley count) and the construction is such that you hardly need to remember anything – you just keep on doing those counts! I like the premise – and although I haven’t properly road tested this yet I see no reason to think that this would be anything other than entertaining for a lay person. Lots of magic happens for a relatively minimal amount of work – and the pun at the end suits my own performance style well – though there are alternatives if that isn’t you.

I’ve even worked out a couple of alternative handlings for the last phase of the routine which didn’t sit quite right with me – that is actually a sign of my desire to use this rather than a criticism of the effect. Anything you’re going to use yourself is worth tweaking.

All in all we like this a lot – and I can see me using this. My only negative point (apart from the minor printing issues mentioned above) would be that re-set will take you a minute – preferably without anyone around. Which means in my usual walkaround setting I could probably only use it once. But I like it enough that I would probably still use it!

Available from Merchant of Magic (with thanks to MagicTao who kindly provided the review copy) – £24.99 at the time of writing.