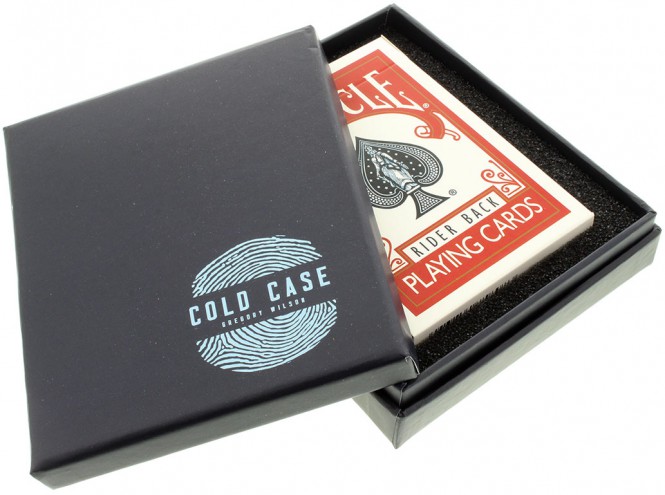 I first saw Greg at the Magic Circle years ago. He has aged a bit (sorry Greg) but he still has an amazing energy and humour in his approach. Cold Case is his take on the deck switch. It owes (and he acknowledges) a debt to a number of things that have gone before, but it a really elegant solution to this most useful of utilities. 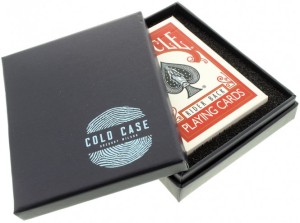 You get a nicely made gimmick which you can customise for another deck (if you’re not using Red Bicycle cards). The gimmick is made from steel and should last a lifetime – and comes ready made so you are good to go straight away. It is nicely packaged and includes a link to video instructions which you can watch online or download. And what instructions – this is 3 hours and 40 mins of instruction and discussion.

Greg teaches at least 8 variant switches for different contexts, and then has a whole extra section on Daniel Madison’s ‘Fractured’ switch which is very powerful. You’ll need to try them all and play with them to see which fits you and your rhythm and what fits the particular trick/application you have in mind. But there are no shortage of options.

Greg is a great teacher and it seems the online format encourages extra detail not less. He talks about the psychology and subtlety of the whole thing. There’s so much to learn here which has application in all your magic – not just in deck switching. I hadn’t really considered it as anything other than a close up utility – but of course it could be really useful in stage work too.

The teaching covers how to get the gimmick in to play, how to make the switch and how to ditch it again. And then, a cornucopia of effects which take advantage of this technique. Here’s a few comments on each of the ten effects.

Let’s fake a deal – perhaps the most obvious use of the switch – a spectator shuffles the deck and then they deal various hands of playing cards and you always win.

Control freak – the spectator shuffles the deck and you repeatedly find the joker, then reveal that the whole deck is separated into ordered suits. It requires a ‘Truffle Shuffle’ to add conviction to the second stage – but this isn’t taught here.

Clear the deck – a cod explanation for how you find a card – as the whole deck turns to see-through cards (Joshua Jay’s Phantom Deck) – apart from the one you’re locating. You will obviously need the Phantom Deck to perform this.

Deep Phreeze – after a very brief ‘Ambitious Card’ routine the spectator is unable to insert the card into the deck which has become solid (a la Paul Harris’ classic Solid Deception). In a flash it turns back again.

Lying your Ace off – you locate the aces (or a royal flush) as the deck vanishes. This is a really nice and surprising routine – the ‘switch’ is well covered – and isn’t really a switch as only one deck is in play. Instead the gimmick helps you ‘vanish’ the deck.

Justin Case – the spectator’s card jumps on top of the card box unexpectedly. When you repeat the effect, the whole deck vanishes and returns to the card box, leaving only the selection in your hands. You will need to be able to steal and palm a card for this one, but it is worth learning if you can’t already because it is a lovely flowing routine.

Leech off Leach – the spectator’s signed card is fairly replaced into the card box only to be found in another different coloured deck of cards. You’ll need to do a tiny extra bit of craft work to complete this one. This is an effective and easy routine. And one of the extra things I like here is a subtle little force – which is sort of like a face up cross cut force but without crossing the cut. This could have applications in other areas too.

The Dean of Switches – as you purport to teach the spectator about deck switches a deck repeatedly changes in front of the spectator’s eyes from mixed to unshuffled – and finally to a blank deck. A nice combination of the gimmick with the Unshuffled effect (available separately).

52 Shades of Greg – another routine built on the premise of teaching about deck switches. The deck changes colour a couple of times in an amusing way and then finally changes to a rainbow deck. Again, you’ll need a couple of extra special decks to make this work.

10 Card Poker Deal – this is the classic routine – but it now looks so much fairer because the spectator shuffles the deck and deals the cards you’re going to use. If you’ve seen this routine before you’ll know how strong it is. There are many variations on this routine – but this has a good number of phases and the switch is done in a very clever way – a great routine.

After all 10 routines there’s still another half an hour of material with extra tips and ideas. With all this material you’re unlikely to get through it all in one go. If you’re watching online, there are hyperlinks to jump to different sections. If you’ve downloaded the file, then you can also download a useful ‘timestamp’ pdf which tells you all the timings of the different sections so you can navigate it by hand.

Cold Case is a great utility device which opens up a whole load of possibilities which, as they say, is limited only by your imagination. You can switch in a stacked deck, switch in or out a gaff deck, use it to vanish or add cards etc. etc.

The teaching is great. The style is fun – I particularly enjoy his interaction with the cameraman and with his ‘assistant.’ Also some of the ‘outtakes’ which are included are hilarious. You can even learn from some of the ‘mistakes’.

The gimmick is well made and should last a long time. The switch itself isn’t too difficult – though you will need to practise a bit to get everything really natural. About the only negative I can think of is that a number of the routines taught require other dealer items to perform them. This is great for opening your mind to other possibilities, but is slightly frustrating if you don’t have the necessary.

But with that very small proviso, I think Cold Case is an excellent release and well worth adding to your collection. Available direct from Merchant of Magic for £32.39 (at the time of writing).