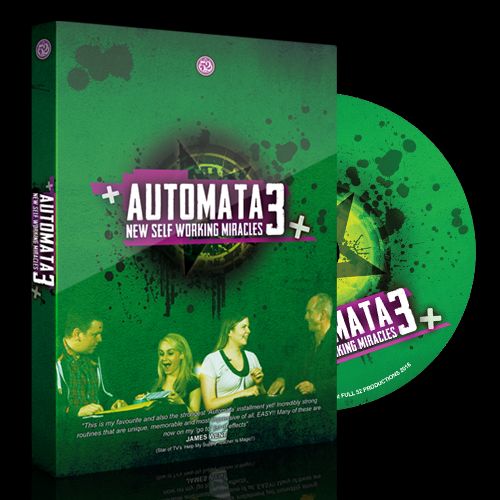 I am in the privileged position of receiving a lot of new magic to review month after month, but there are definitely some releases I’m more excited about seeing – and Automata 3 was one of those. Volume 1 and Volume 2 have both been full of strong, self-working non-card magic and we loved them. Would Automata 3 be so strong? Read our review to find out more and to find out how you could win a free copy!

But you want to know about the tricks first, right?

ESPionage – Gary Jones has come up with a really simple but effective use of an old principle which provides you with a super-clean miracle. Essentially in spite of a really (genuinely!) fair mixing and selection process, you can reveal which ESP symbol a spectator has chosen. In the routine taught you do this twice under increasingly astonishing conditions.

The same principle is also adapted for a variation Steven Tucker’s Visa Cabaret routine – where you can predict which coloured card ends up in which of the spectator’s pockets. This requires a little bit of one-off craft work to make the necessary – but it is very straightforward and only takes 5 minutes. I believe Full 52 are also selling the cards ready made up if you prefer. Super little effect.

A-Can – This is Dave’s twist on the old barcode gag which takes it to the next level. The spectator chooses a card from a whole stack of cards which have different grocery products on the front. You reveal your prediction to be a barcode – and after the groan show that the barcode does actually contain the name of the product. In a final kicker ending you then produce a tin of the product from the (previously obviously flat) prediction envelope. Great fun, easy to do. Love it. 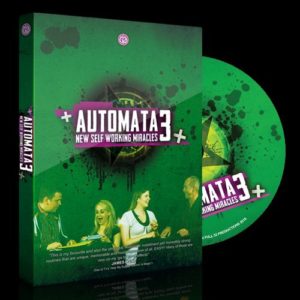 Dobson’s Diddle – a clever prediction effect based on a Wayne Dobson idea. Despite some very fair looking choices you reveal that you have predicted the outcome of a spectator’s free choices about where to place various objects. This is very easy to do, but will require you to think about the procedure on the fly. A couple of subtleties lead to a very fair looking outcome.

Arty Farty – this is a different sort of a prediction effect. The spectator chooses the name of a famous piece of artwork from a selection of many. You make a drawing (‘forgery’ in the clever plotline!) to reveal their choice – but it just looks like a load of scribble. But when some heat is applied, the spectator’s chosen image is revealed. This is a fun and different take on a prediction effect. Easy to do, though a small bit of preparation needed. Quirky.

Fruit Loop – this could be my favourite effect on the DVD. The spectator (genuinely) freely chooses a card from a selection of cards bearing the names of different fruits. You show that you have predicted not just that choice, but the cards either side of it – in a very funny and visual way. I don’t want to spoil the fun by telling you the detailed scenario – but you’ll have a lot of fun performing this entertaining and very easy effect.

Any Tome, Anywhere – this is a book test where you can reveal the word or words at the top of a page in any book. This essentially relies on a mathematical principle to do the dirty work for you. For me, the process the spectator goes through in order to get to a ‘random’ number is a little bit involved. There are some nice subtleties in Dave’s handling of the revelation, but for me this wasn’t a highlight.

Purple Monkey – in this routine you appear to read a spectator’s mind and reveal a random image they have simply created in their mind. Lots of nice things about this one – it is genuinely easy to do, takes up little space, and gives them a nice takeaway too. And again there are some great subtleties which obscure what is going on here. Brilliant.

Positive Change – the spectator places three coins on the table according to various free choices and then chooses one which they ‘flip’ behind their back. Your prediction shows you knew both which coin and which way up it was going to be. Building on some previously released ideas this is a neat semi-impromptu effect. For me this wasn’t earth-shattering, but with good presentation skills it would certainly impress a spectator.

RPS Extreme – in this effect you appear to be able to predict the outcome of several games of Rock, Paper Scissors. The first phase is impressive but the second knocks your socks off. Gary is clear that he has combined ideas of others to make the routine work, but it is a fantastic idea with good audience involvement.

The Secret is not so much a magic trick as a puzzle, which I first saw on an earlier Full 52 release – David Regal in the UK – though its history is much older. To an interesting story you trade ‘bank notes’ and pints of beer and everyone is puzzled by the outcome. It seems to me this would work really well in certain settings, but if I’m honest I’m unlikely to use this one myself. The necessary ‘notes’ are available as pdfs on the DVD to print your own.

As if this were not enough – there is also a free download of two extra missing effects which didn’t fit on the DVD. The tricks are:

Pageboy – this is a sort of ‘book test’ but with an unexpected extra ending. This is something called the Pegasus Book Test (not sure of the creator) – not only can you predict the word on the page they freely choose, as an extra kicker, when they look at the book again the page they looked at has been torn out – and is found in a prediction which the other spectator was holding from the outset. You will need to make up a couple of things to perform this – but the effect is so strong that it is well worth the effort.

Call the Chops – a series of number cards are freely mixed based on choices made by the spectator and end up predicting your phone number! This is based on an old principle but makes a nice way of giving out a business card or passing on your number…

The whole thing is well produced – although there were a couple of glitches in the sound level when I watched (which may just have been to do with my computer but I haven’t had the time to check) – though this didn’t get in the way of understanding.

Explanations are very clear and easy to follow. And I, personally, enjoy the banter between Dave and Gary. It’s great to see two magicians who get on well together and respect each other and who chuck in ideas on the fly and discuss wrinkles and subtleties as they go. They are both real performers and are worth listening to.

It’s hard to compare different releases with each other – was this the strongest of the set? Possibly. I really could see myself using all but one or two of these effects in the real world, and will definitely be making some of them up to use. If you don’t want to go to the trouble of manufacturing some of the items, Full 52 are (as in the past) selling some of the accessories you will need.

Highly recommended. What are you waiting for?

Automata 3 is available direct from Merchant of Magic for £21.98 (at the time of writing).

And if you’d like to be in with the chance of winning one, then enter our giveaway!