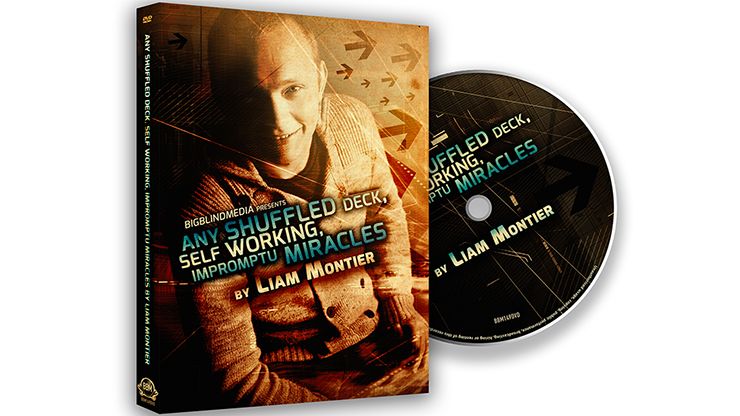 BBM have a solid reputation for releasing quality self-working type material so I had high expectations when Any shuffled deck, self-working impromptu miracles turned up on the review pile. And in spite of its less than catchy title, I’m pleased to say my expectations were more than met on this great new release.

Let’s talk about the tricks

Interstellar OOTW
Here’s Liam’s handling and get in to Paul Curry’s classic OOTW. It’s got a nice presentational premise, works with a shuffled deck and is easy to do – though requires some bold handling! OOTW is a fantastic effect – and even though it takes a while to perform, there is little to beat it from a pure magic point of view. Liam teaches some neat handling subtleties on the way and using the first effect as a way to set up ‘in plain sight’ is genius – a superb start to the DVD!

Mates
This is a funny and clever way of producing four of a kind from a borrowed shuffled deck. You start by reversing three ‘prediction’ cards without changing the order of their shuffled deck. After an amusing start, you reveal their chosen card, and then the earlier predictions reveal the three ‘mates’ of their chosen card. I was caught out by the second phase – though it is actually delightfully simple. Love it!  (If you get to the end of the review I’ve included a performance video!)

Gemini Location
This uses an old principle in an unusual way. Under the premise of reading ‘body language’ or ‘vocal tellls’, you are able to correctly identify 3 different cards that spectators have looked at and lost in the deck. Liam teaches 3 phases but you could easily just use one or two of them if you prefer. I like this – and may well use it as an alternative to another routine I often perform with the same principle.

Silly Questions
The spectator’s chosen card is placed within a small packet, then a series of silly questions are asked which result in one card being found – the chosen card. This one didn’t really grab me, but I haven’t road-tested it with real people so it might come across better in the real world. 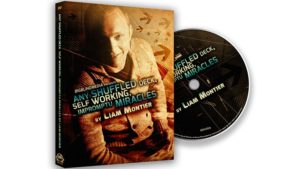 Wheel of Fortune
A pseudo fortune telling demonstration in which you manage to predict two cards at random locations from a selection from a shuffled deck. There feels to be a lot of freedom in the spectator’s choices and if you can do a little bit of cold reading too, you’ll have an entertaining and fooling routine.

Jack’s Poker
From a well-mixed deck, the spectator gets a poker hand worth of cards and merely thinks of one card which would improve their hand. They then manage to cut to their merely thought of card! Some lovely subtleties going on in this very effective routine.

Salto Triumph
This is a very easy routine with a triumph kind of feel to it. You and the spectator each take half the deck, and choose a card behind your back. You insert your cards into each other’s section and then shuffle the two halves into each other, half face up and half face down. With a click of the fingers, all the cards turn the right way round, with the exception of your two choices. Variations of this effect have been around for a while – so it doesn’t feel radically new – but it is nonetheless a great easy effect.

Last to Turn Up
This is the least ‘movey’ and most ‘procedural’ effect on the DVD and is based on an old Ken de Courcy effect (which immediately took me on a nostalgia tour). A card selected by the spectator is lost amongst three poker hands and then the spectator finds it themselves by following a simple procedure. I think you’d need a pretty compelling hook to make this one truly entertaining, but a completely self-working surprise.

Invisible Dice
An imaginary dice (die, technically!) is used to help the spectator merely think of a card from a random selection of six. The cards are then lost in the deck and the spectator pushes your ‘lucky’ card into the deck and manages to locate their merely thought of card. This is probably the most complicated effect to perform and is definitely pushing the limits of ‘self-working’ – since it requires a couple of ‘procedures’ one of which needs to be done somewhat covertly. That being said it is still not ‘difficult’. However, I personally didn’t much like the ‘outs’ used in this one.

One over the Eight
To a presentation about the so called ‘butterfly effect’ several spectators all deal random quantities of cards from a shuffled deck, and the card finally reached matches your prediction. In some ways it is a self-working CAAN effect. Entirely self-working but not, perhaps, the greatest mystery in the world.

So is it any good?

For me the disk falls in two uneven halves – six of the first seven effects are brilliant and though you may have seen some similar things before, they each merit inclusion on the DVD. The last 3 all feel a little weaker to me – but some real world road-testing may prove that wrong.  The fact that all of them can be done with a borrowed shuffled deck is amazing!

As ever I appreciate Liam’s self-deprecating style, clear teaching and the little tips along the way. All the effects and explanations are shot with classic BBM clarity – even if I do find the lightly jigging Liam on the DVD menus slightly disconcerting!

I’m always on the lookout for routines I can perform on the spur of the moment when challenged to ‘just show us a trick’ – and several of these would meet my criteria. So for the small cost of a DVD you’ve got yourself a lot of credibility!

Any shuffled deck, self working, impromptu miracles is available direct from MoM for £28.99 (at the time of writing).