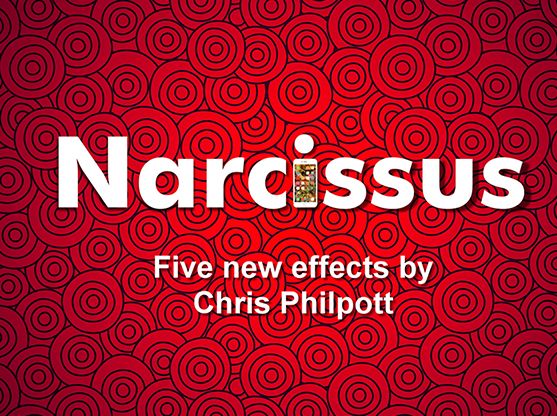 It’s probably fair to say that the effect that brought Chris Philpott to the attention of many magicians was his wonderful and groundbreaking 100th Monkey. This was really a new principle for magic, rather than an effect, though it came with a number of effects that could be done with it. Since then he has released a number of different effects based on that principle, and Narcissus is really a set of specific applications of that principle, particularly aimed at close up and walkaround situations.

Like The End of My Rope Trick we recently reviewed, this appears to be have been filmed at home (you will recognise the curtains!), and the production values of the DVD go with that. There is nothing wrong with the quality – but it feels more homemade than many modern releases.

Chris loves words and there are plenty of them on the DVD – it runs to about an hour and a half, which includes performances of 5 specific effects filmed with real people by the beach! 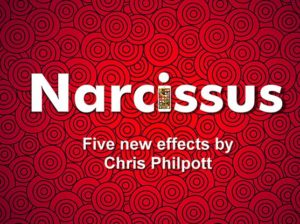 I’ve got to say I love the routines – they are really strong on an emotional level and the fact that the magic happens in their hands (or on their phones!) makes it really powerful. There is also an incredible marketing opportunity when you leave a video of your magic on their phones – get it on social media and tag yourself up and the bookings will roll in!

I’m not going to describe the routines in detail – since they are really what you’re paying for – but each one is well thought out and evocative. The themes of hypnotism or influence work really well – and in some instances turn a simple card trick into a miracle, or else reveal hidden information in a remarkable way.

The release comes with 2 DVDs – one of which contains full scripts and also graphics to enable you to print all your own cards. Sadly, mine came with two copies of the teaching video, so I’ve not been able to look at the scripts or see the range of images that you are provided with – but from what is said on the video section it sounds like you ought to get a lot of different possibilities. I will chase up the supplier and see if I can get the second disk and update the review later.

All in all, I love this and think they are brilliant effects, but two tiny notes of caution follow. The first is that since this is an optical principle, performing conditions and especially your spectator’s eyesight may have an impact on the effectiveness of the “magic.” There is plenty of discussion on ways around this – and some extra ideas are available on the dropbox which is available to all registered users of the product (this extra material is a nice feature which seems to be a common feature of Chris’ releases) – if you’ve been performing for any length of time you will have the audience-management skills to get round this.

Secondly, if you already own 100th Monkey, you’re only really getting some new presentations. Now I think these are strong presentations and worth the investment – but you will have to decide whether you make that investment. If you’ve not yet bought any of these effects, then Narcissus provides a cost-effective way into this principle, especially if your primary working environment is close up or walk around magic.

So we think Narcissus is a powerful and effective set of routines utilising this ingenious principle. It is available direct from Merchant of Magic for £57.50 (at the time of writing).

PS if you like this principle, you’ll also want to check out Babel!