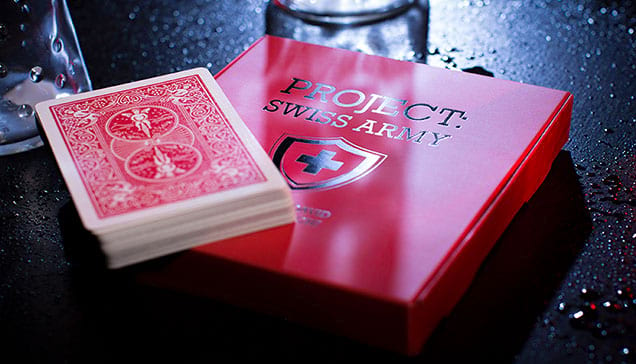 Project Swiss Army is a gaffed deck and card box which opens up a range of magic options for you largely without the use of sleight of hand. Here’s our review…

A nicely produced and printed cardboard box which houses your deck, and also has details of the link to the online teaching. Everything is well made and the teaching – which runs to a little over an hour – is clear and detailed.

In one sense with Project Swiss Army you have two utilities for the price of one. First the card box, which enables you to secretly extract (or insert) something into the sealed deck. I’ve never handle the Extractor Deck but I suspect it has at least some overlap with that – which they reference several times during the teaching. However, in addition to this you have the specially gaffed deck – which opens up a whole range of effects with barely any sleight of hand. So this appears to be more versatile (and much cheaper!) than The Extractor.

Time Out – The ‘basic’ effect – a card is chosen and signed, and returned anywhere in the deck – no break! The deck is then returned to the case (and freely shown all around) and put in your packet – whereupon you can instantly produce the selection however you want. Their presentation is a kind of ‘challenge’ one – how quickly can I do this. Simply, clear, magically strong, but an uninspiring presentation for me. But so easy to do – this would be the starting point for any presentation you fancy.

Utility Strip Out – this is a way to use the deck to instantly retrieve any set of cards you wish. It is taught with the four aces – which are clearly show throughout the deck – and then very visually can be removed in a flash. Could be a neat way into a packet trick – even the trusty Twisting the Aces.

Flick Out – a card is chosen and signed and returned to the deck. And then you visually locate it by flicking the deck – and it flies out! Again, simple and direct and visual. Maybe good filler in a longer routine? 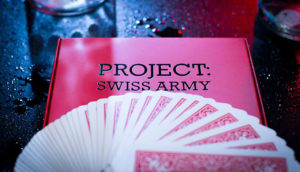 They also teach a couple of handlings for using the deck to force cards.

A Bonus Ideas section outlines a few variations and begin to help you think ‘outside the box’ in terms of extra phases and options for the deck. Nothing hugely grabbed me here – but it is probably helpful to get your own ideas flowing.

This is one of those things where I am slightly in two minds. I can see that Project Swiss Army could be very appealing for the beginner – because it enables you to do some very useful things with very little sleight of hand. For someone who has been around longer, pretty much all of the effects could be produced with only basic sleight of hand.

The nature of the Project Swiss Army deck means it is slightly angle-sensitive – and you can’t really use it for any other routines requiring a ‘normal’ deck. As I write I can think of two other gaff decks which would enable you to produce very similar effects but which would also let you handle the deck more openly (and use for other ‘no gaff’ routines). But the advantage here is that the gaff makes the handling incredibly easy which would make it particularly helpful for a beginner. And you also have the benefit of the cleverly gaffed case – which could be used with any deck and routine you like.

I also like the idea of using it in a mentalism context where you are only using cards once – you could use this for a really easy multiple force as part of a mind-reading routine. And the simplicity of the procedure would enable you to concentrate on performance.

The teaching is very clear – possibly slightly on the long side – but it is probably better to be clear and longer than the opposite. I would, however, have really have liked to see some live performances.

So all told this is a pretty good release. I think it is more likely to appeal to the beginner than the pro – but I can see useful applications for both. Let us know what you think…

Project Swiss Army is available from MagicShop.co.uk for £33.50 (at the time of writing)