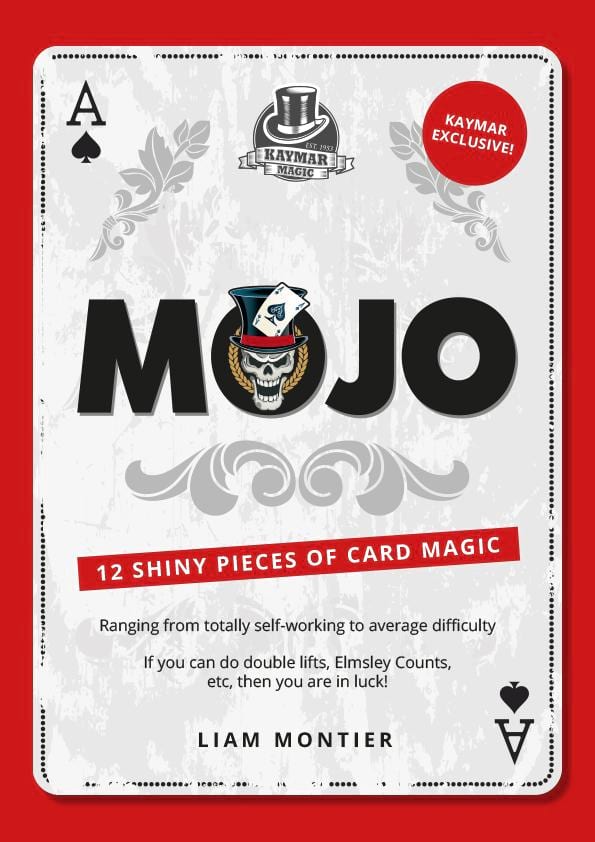 Mojo – is one of the latest releases from Liam Montier’s excellent Kaymar Magic Studio. I love Liam’s passion for magic and his desire to educate magicians and put out quality pieces – rather than just turning out another 10 pieces of old tat. So I was looking forward to reading Mojo. Liam – I’m sorry it has taken me so long to get round to it in the midst of all the chaos of our recent move. But at last, here goes, the Mojo review…

After a brief introduction, it’s straight in to the tricks. There are 12 of them. I’ll comment on them all in turn…

A lovely shuffled deck impromptu routine sort of combining the Biddle Trick and the Finger print trick. A card is selected and lost in the pack. Some ‘indicator cards’ are cut to which reveal the location of the card. Which seems impossible because one of them is the chosen card. But all’s right in the end as the chosen card appears where it was indicated and vanishes from the indicator packet. A great little impromptu trick with pretty straightforward handling. Don’t miss the Killer tip on the Biddle steal in the footnotes!

Liam has combined to 2 John Bannon effects (a good starting point!) to make something really special. To a fun presentation you read one spectator’s mind and a second spectator locates their own thought of card themselves! I love the subtle way that this has been built (including a genius John Gusastafarro idea). There’s a slight knack to making the final revelation work – but worth a little practise for a super practical effect. This is a great example of Liam’s genius for ‘cross-fertilizing’ ideas from different books and effects to build a killer new idea.

A card is chosen and lost in the pack. Then the four aces are openly displayed. In a flash the one matching the suit of the spectator’s card vanishes and reappears in the centre of the deck right next to the selection. This is another strong effect. I think you need to be a slightly more confident card man to do this well – but it doesn’t require any real finger flinging. A solid effect.

Liam’s take on the Alex Elmsley classic Between the Palms. Two cards are selected and one signed. Both are lost in the deck. The first card is located by counting down to a number indicated by two cards from the top of the deck. The second is found between the spectator’s hands – where a single card had been isolated before the trick began. I wasn’t so fond of the handling of this one – though I liked the presentational hook.

This is a very clever take on an old effect and utilises more sleight of mind than hand. The spectator names any card – then you cut to two cards which represent it’s suit and value – and show that the actual card is in your pocket. This is a really interesting effect which has been well structured. You may have to perform a gamblers’ cop – which may put some off – but there is a fair bit of misdirection at that point so it shouldn’t be too intimidating. Unusually for Liam the description is slightly confusing at one point when he switches between the names of two different cards. I’m sure that will be corrected quickly.

A neat signature transpo effect which is dead easy to do. And best of all – the signed card ends up being a Joker – so you can use up all those spare jokers that are knocking around and not trash a deck! This is based on a Roy Walton effect and is a really efficient handling. Good sstuff.

This is an interesting premise where a spectator deals two hands of poker and then he and the other spectator both choose a card from their hands. Both cards are revealed in completely different ways. There are some nice ideas here – including an interesting take on the venerable PATEO force. I think this is really rather effective.

This is an idea for a phase in your Ambitious Card routine where the card travels in ‘slow motion’ through the deck. Dare I say it, the Ambitious Card bores me. But if you perform it (and most people seem to!) then this could be a nice little extra element.

Three cards are lost in the deck and then found amongst a packet of four kings. And in a surprising climax the kings visually turn into aces in a very nice display. This is another interesting plot using some pretty moves. Liam details a number of alternative handlings to cover all abilities and tastes. Nice! 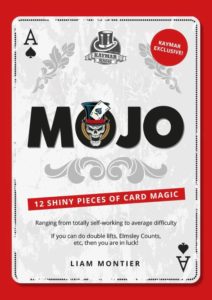 To the Untrained Eye

Four kings are lost in the deck. You instantly find them – but one is actually an ace. In an instant they all change into aces. I really like this (based on a trick I must have overlooked in my old copy of Cy Enfield’s Entertaining Card Magic!). There are a couple of moves to get your hands around – but really nothing too tricky and clever construction makes it very convincing.

Two cards are chosen and returned to the pack. You read the first spectator’s mind. Then their card appears reversed in the deck. An instant later the second selection also appears in the same way. I haven’t had a chance to try this in anger and I suspect it will play better than it reads. Bold and cheeky!

A very visual transposition of a chosen card and indifferent card – with an amusing patter idea to support the mechanics. Pretty simple mechanics for a pleasing effect. Give it a go! And here’s a video – since I couldn’t describe the effect succinctly!

This is a solid release. There are some great effects here – and even if they don’t all suit you I would defy you not to find at least 3 that you will use – which makes it pretty good value!

The magic is good and it is a well written ebook. I enjoy Liam’s slightly quirky patter and also the many insightful comments and observations. The magic geek in me also enjoys reading about the development of the tricks – and how Liam’s twisted brain came up with the ideas.

Buy it, read it then read it again.

Mojo is exclusively available from Kaymar Magic for £11.99 at the time of writing (though they often have deals on!).

Many thanks to Liam for supplying the review copy.