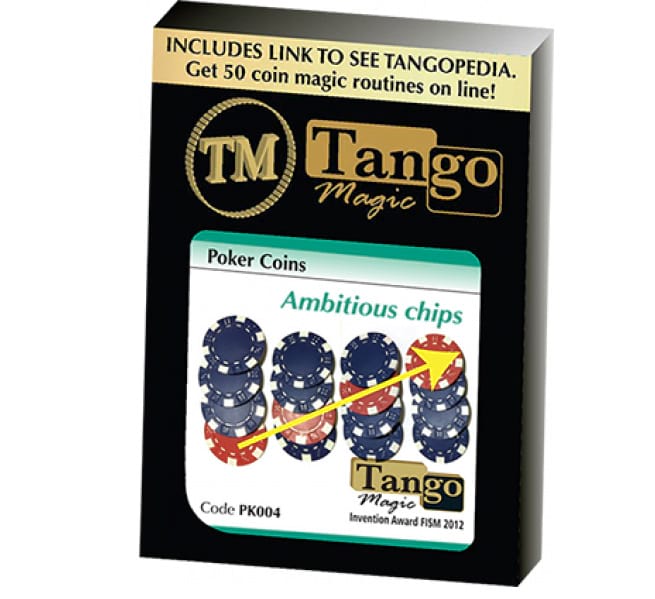 Let’s be honest, close up magicians do the Ambitious Card effect to death. And it’s a good trick. It’s easy to follow and involves the audience. So the idea of doing the same kind of effect with Poker Chips intrigued me. Here’s our Ambitious Chips review.

You’re supplied with the necessary poker chips (see below) and a link to some online instructions. The instructions only run to just over 15 minutes, and include an almost 3 minute introduction! So the teaching for the three different methods is necessarily brief. Let’s talk about the three methods.

Method One – The Tango Touch

In this version, the performer stacks three blue poker chips on top of one red one. With a ‘flick’ the red chip is seen to climb to the second position. And this is repeated three times so that it reaches the very top.

This is a pure sleight of hand method using ordinary chips. I say sleight of hand – like many sleights it is a bit of a knack. In my experiments the surface you were performing on made some difference. It will take you some practice to get it looking as effortless as Mr Tango – no matter how many times he tells you ‘it’s easy’.

In my experience it becomes easier the further up the stack the ‘ambitious’ chip is.
If you can get the knack this is an effective and visual piece of close up magic.

This method is in many ways easier because it utilises some gimmicked chips – but nonetheless the larger portion of the teaching is given to this routine. It requires much less technique – though the ‘Tango Touch’ is utilised for the last rise of the first phase. This is the easiest use of the ‘Tango Touch’.

The second phase looks the same as the first, but uses a slightly different method for the final chip – which doesn’t use the sleight. So I suppose if you wanted you could just do phase two without needing to master the Tango Touch. 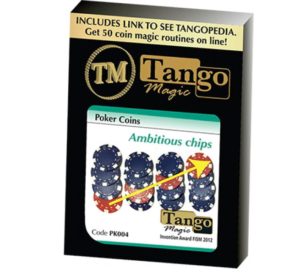 This is actually a slightly different effect because the ‘ambitious’ chip is amongst four other chips. It is placed in the middle of the stack and jumps to the top twice. Like the second method this uses gimmicked chips, but also requires some sleight of hand.

I think this felt less like a routine and more like a ‘phase’. So you might want to work this into a bigger piece. Perhaps you could start with one of the earlier methods and then ‘make it more difficult’ by adding a further chip?

These are nicely made as you would expect from Tango Magic and are pleasantly weighted. Personally I have a bit of a soft spot for poker chips and think they are visually pleasing and pleasantly tactile. You could work these into other routines with Poker Chips if you wanted to.

I would have a small concern that if you were working in very close proximity the gaffs could be exposed from their sides. Best viewing angles would be from more overhead than side.

If you like magic with poker chips, then this would be a useful purchase. The Tango Touch could be utilised in conjunction with other sleights and gimmicks and routines. In fact given the nature of some of the moves in these routines, I wonder about combining these chips with an Okito Box or similar – a One Dollar size ought to match. Then the possibilities would multiply…

Ambitious Chip is available from the Merchant of Magic for £32.99 (at the time of writing).