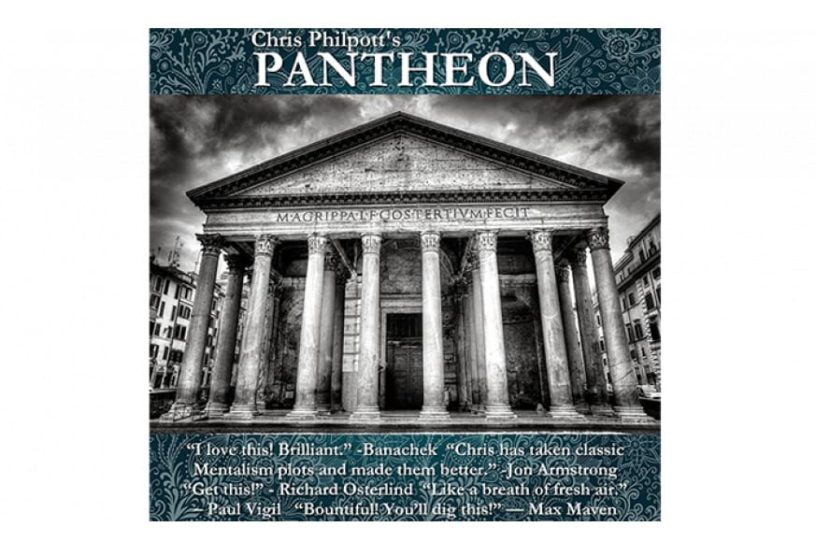 So Pantheon is the latest (fourth?) release in Chris Philpott’s wonderful 100th Monkey principle. Christ Philpott is a clever magician and thinker. For the last few years (amongst other things) he has been working with this fiendishly clever principle to create some really strong magic. You can read my reviews of Narcissus here.

Pantheon takes the principle and explores its application to a whole range of ‘classic’ mentalism plots as well as returning to some more familiar 100th Monkey effects. You never get a ‘small’ release with Chris – so this triple DVD set includes 24 effects, 12 postcards, 12 performances (with different performers), 500jpgs (to print your own cards) and a 220 page ebook. By any reckoning that is a lot of material! And if you sign up for updates you’ll actually get a whole lot more too.

Two DVDs of contain performances and basic explanations. One of the great things is that you see a variety of different performers with very different styles working these effects – which gives you a sense of the flexibility of the principle.

The third DVD has all the resource files and the ebook – which is the thing which actually contains the full details (including scripts). These are superbly comprehensive and a brilliant resource.

The whole thing is shot in the same, familiar front room with the dodgy curtains! And that is one of the things I love about these releases – they are very straightforwardly his thing.

There’s so much on these DVDs we can’t exhaustively cover it all, but I’ll mention some of the key effects.

Mental Epic – to solve the ‘illogical prop’ weakness of the classic mental epic he almost introduces a new one – with little white boards with a label attached to it. These seemed just as odd to me as the original prop – though you could work it with the labels simply printed on heavy board which you write on. But this is no doubt a clever sideways use of the principle.

There’s a good performance (especially in the light of the conditions!) from Steve Valentine and helpful commentary and tips. A number of variations are possible with different themes (film, holiday, dream date etc) – and it could possibly even used close up. 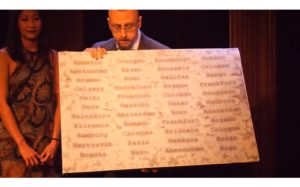 A nice principle which is included on this release is The Forcing Poster. This is essentially a very large scale poster which relies on a dual reality principle to force from a limited range of options.

Drawing Duplication – There are several variations on this theme. Rob Gould performs Monet Monkey. I found him to be a somewhat hesitant performer (lots of ums – but perhaps that is part of his performance persona). This is a pretty pure dual reality type effect – and I didn’t like this so much. Spectator chooses a ‘frame’ which all have different colours and patterns and is inspired to draw a picture – which the performer also draws (approximately).

There are a several more variations on this theme – one of which requires a (rather expensive) additional prop. Some of them rely on the Forcing Poster.

Planet of the Monkeys – performed by Aiden Sinclair (great performance) – I really like the clever idea here – but it partly relies on a US trait of not knowing your worldwide geography too well – it would be much less fooling in Europe! Perhaps with thought it could be re-worked to suit our context better.

Monkeys Ahoy – Michael Rangel performance. Perhaps he didn’t like the idea of the title Tossed Out Monkey? This is based on the legend that is Luke Jermay’s Touching on Hoy. It’s a strong triple mind-reading effect with 2 versions on the DVD.

Chair Test – the chair test is a classic mentalism plot which exists in many variations. In The Monkey Sits (performed Steve Valentine) we see the Monkey principle and another readily available gaff. This is a clever idea – but in some ways I wonder if the principle is overkill here.

Monk Night is a bank nite method which would also have other applications. I think John Archer may still have the best method for this!

The Monkey Peeks – another potential layering idea to any effect using peeks.

Laughing Monkey – applying the principle to a classic mentalist’s ‘joke’!

As always, there are same ‘physical’ limitations on the principle – you need to watch light levels and people with poor eyesight! Though there is an interesting thought on how to check the latter provided on the DVD.

The effectiveness of the illusion is enhanced by the ‘busy’ (mucky?!) backgrounds on the cards – and to me this seems a little incongruous – when we’re used to neatly printed or hand written words on envelopes. But I may be overthinking this!

As usual, I would say you get a lot for your money. Chris is a creative guy and the ideas he has will get you thinking. He is also very responsive (in my experience) to email contact – so if you have a brilliant idea for the principle he will help you work it out.

As with previous releases you can sign up for updates etc. I have experienced the value first hand in this – when he sent some excellent resources to capitalise on the Yanny/Laurel viral video for example.

I enjoy his quirky and sometimes tongue in cheek explanations and his apologetic partial filming!

In short, if you’re into mentalism in any shape or form, you would be well advised to take a look at this or any of the 100th Monkey releases.

Pantheon is available from MagicShop.co.uk for £68.99 (at the time of writing).