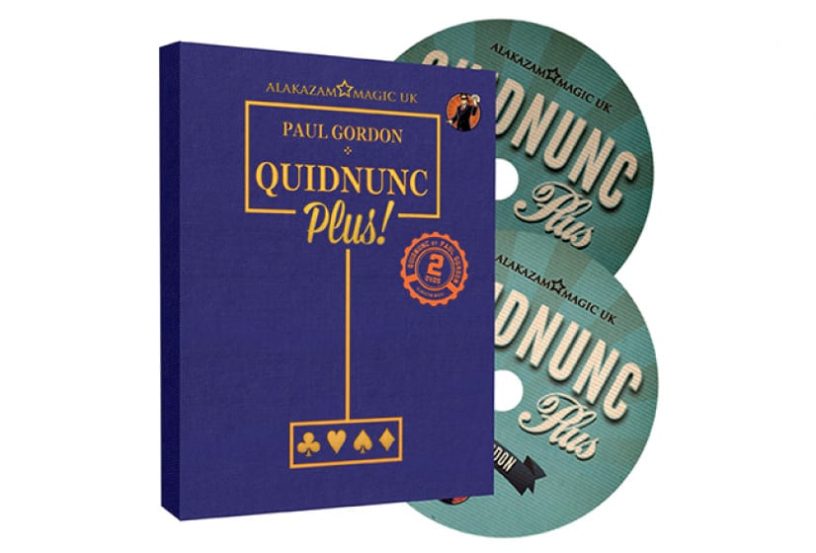 Quidnunc Plus – is Paul Gordon’s latest release with Alakazam. It’s some years since I’ve seen any of his DVD based material – and the quality has definitely upped with the Alakazam influence. If you know Paul Gordon, you’ll know that this is all going to be card material. Let’s get on with looking at some of the tricks…

Jeepers Creepers on Heat – is a packet trick related to his commercially released Jeepers Creepers. It’s a very magical change of 5 cards from 5 of a kind to a royal flush with rainbow backs. Strong and clever and not too difficult to do!
Dudeney’s Baby Boy – a self-working prediction which appears to give the spectator lots of choices but always ends up with the right result. Similar to a principle explored by John Bannon from Dear Mr Fantasy onwards… And Paul explores it himself in his Gold Dust book.
Ace in the Hole – a great transposition effect where two aces from your hand join two aces under the spectator’s hand in an instant. This is ‘knacky’ rather than difficult – and I like it a lot!
Balducci Aces – another nice simple effect where a spectator cuts to a card which matches your prediction and then the other two turn up on the bottom of the two cut piles. The name will tip most of the method – and its a great easy to do impromptu effect.
Spectrum – another packet trick which has been released separately. I know it is odd to call the premise of a magic trick illogical – all magic is on some level! But this one is slightly odd to me. You start with 5 cards which are printed with the same face on front and back. They then turn into cards with normal backs. And then the backs all change to different colours. Ends clean – if you like it you’ll like it …
Travelling Light – a sneaky and punchy cards to pocket effect where four signed cards repeatedly leap into your pocket. This is really nicely routined, and although it does require some palming, it is well within the reach of most performers with a little practise.
Easy Collectors Two – based on an Ed Marlo idea – three selections are lost in the deck and instantly appear interspersed between the four aces which have been on the table throughout. Some really nice touches in this routine which has obviously evolved over many years of use.
Darned Pain in the Neck – A spelling card appears to keep going wrong with the same card turning up each time but all is righted at the end when the Aces appear on the top of four discarded piles. This is an amusing and unusual plot with a good kicker ending.
Worker Supreme – (sidenote – does anyone outside of the magic world use the word supreme?) A card transposition and a chosen card to wallet all rolled in to one. Ironically though you don’t need to palm the card into the wallet, you do need to palm a card! But you have plenty of misdirection at that point… A great little routine.
Perfect Prediction Premonition – a very old force given a new lease of life. A spectator thinks of a card at a number corresponding to a small packet they have freely cut off. You have predicted it. Paul’s version requires straddle pharaoh’s – but you could do it without them if you go for a different setup.
75% Confident – based on a Jack Parker routine. You remove two cards from a shuffled deck. You then remove some other cards from the top of the deck and they turn into the mates of the first card. Then in an instant they turn into a royal flush. Can’t quite work out what I think of this one – it feels like a slightly odd plot to me. 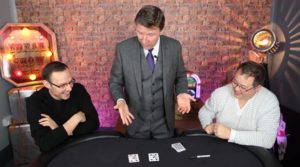 Rising Damp – this is a nice ‘from the deck’ packet trick. A Jack (or some other card) repeatedly rises to the top of a four card packet. Then all the cards change to the same value. Then they change to four of a kind. Lots of magic in a short time. This is really nice.
The Churchill Crown – this is a sort of sucker prediction effect where a card is predicted on a sticker under a coin. I’ve watched this a few times and I’m still finding the actual effect a little confusing –but that’s probably down to lack of sleep…
Bluff ACAAN – exactly what it says on the tin – a really cheeky ACAAN. The card is chosen rather than thought of – and then returned to the deck. Easy to do and surprisingly effective.
Dream Away – a nice take on the dream card effect – where a card that is in your pocket from the beginning (with a different coloured back) turns out to be the actual card chosen and signed by the spectator. No gaff cards needed but a little bit of setup. Great strong effect as long as you can do one move…
Ultimate Transposition – this is a great four card transposition where the cards appear to move one by one. A bit of work to get this one under the fingers but well worth the investment.
Ace Tumblers – the four aces locate the chosen and lost card – and turn themselves over in the process. A nice quicky.
Tally-Ho Simplified – A spelling routine utilising a Tally Ho! Deck to a quirky patter idea. I’m not a great fan of spelling tricks and don’t tend to use Tally Ho! Decks – so a bit of a non-starter for me this one.
Unusual Method Oil&Water – another trick title which is specific if not catchy! It’s a self-working packet trick version of the oil and water effect. I thought this was a one of the weaker effects on the set – quite procedural.
Witch Mountain Revisited – based on an Alex Elmsley routine (which is always a good start…) It’s like a slow motion four ace trick but with queens – i.e. the four queens travel one at a time from four piles into one chosen by the spectator.
Q&A – there’s a roughly half an hour long Q&A with Paul in which he teaches a few ideas and answers some really practical questions about starting out in magic, approaching tables, and interacting with spectators. This was a great little addition to the DVD and as well as being full of useful tips, gave a nice insight into Paul’s character.

There are so many effects on this set that you are bound to find several that suit you. I love the variety of plots and of skill levels – there really is something for everyone. His explanations are clear and contain just the right level of detail.

Paul’s capacity to create and perhaps more amazingly to remember this much magic is astonishing! He clearly has an excellent memory! This plays out, amongst other ways, in good crediting which I always appreciate.

His trademark ‘energy’ is evident – even when performing to magicians in a studio. A nice foil for Dave’s trademark gormless expressions!

Quidnunc Plus would make a great Christmas present for yourself or for the magician in your life. And I think I’ll be looking out for a copy of the Quidnunc book too. You can pick up the DVD from MagicShop.co.uk for only £10.39 (at the time of writing – but it looks to be in a sale so that price might go up soon!).