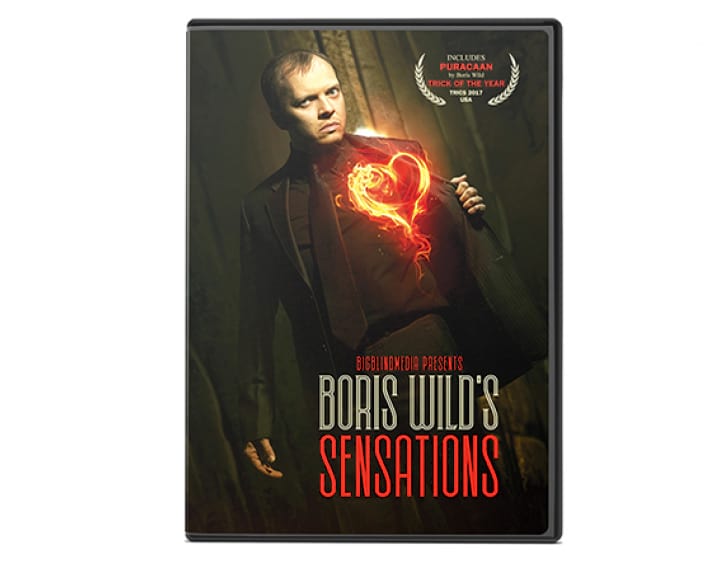 Sensations is a double disk DVD in which the incomparable Boris Wild explores effects related to our sensations. It’s been sitting in the review pile for a while but I’m so glad I opened it today… Let’s get in to the tricks.

10 Max – this is a great ice-breaking opener where the spectator gets the chance to win money. The spectator chooses 5 cards for themselves and 5 for the performer but somehow all the ‘money cards’ end up with the performer. A really nice twist on a trick you may already know – but taking it to a completely different place. Easy to do so you can concentrate on the performance. And there’s scope for a lot of fun with the presentation. He also suggests a few variations using other themes – but if you want to explore this in more detail he has published a book of the same name.

Show Off – this is a sort cousin of the venerable Ambitious Card, but instead of a selected card repeatedly jumping to the top, it repeatedly reverses itself in the middle of the deck with no apparent moves. This is repeated several times and in the final phase the whole deck dramatically turns itself over in an instant. A well constructed routine which does indeed make a pleasant change from the (dare I say it?) over-performed ACR. Also provides a great use for a gaff you may well have sitting around. A great routine.

IPOP (Impromptu Perfect Open Prediction) – this does what it says on the tin. The performer makes a prediction and openly displays it at the start of the effect. The cards are shuffled and then the spectator deals through the cards one by one face up stopping whenever they like. The card they stop at is kept face down and the rest of the deck dealt face up. The predicted card is not seen amongst the face up cards. With no funny moves at all the stopped at card is shown to match the prediction. Very clean!

This is an impromptu version of POP which Boris released a few years ago. There is a tiny set up – but easily done on the fly. The method is clever and doesn’t require lots of sleight of hand but you will need to practise the moves which are used. A great take on the Open Prediction.

Symbiosis – is a very clever coincidence effect – where two cards at freely chosen numbers from freely shuffled packs match – and then you have predicted the card in advance. It is very rare for a trick to fool me these days, but this one got me in the sense that I didn’t see the move at all. When I reflected upon what I had watched I could only conceive of one possible method which did pretty much turn out to be the solution. But it is a very clean looking and strong effect. He provides some helpful thoughts on different scenarios and performing the effect in different circumstances. And as he points out, it would make a lovely wedding effect!

PURACAAN – is really a one deck version of Symbiosis which looks more like a traditional ACAAN. This is a nice solution to the classic plot with very few restrictions. Call me set in my ways, but I still think Barrie Richardson’s method is the best impromptu ACAAN I’ve ever seen But this is a very workable alternative. 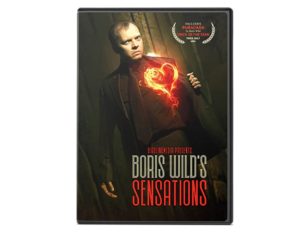 In addition to the tricks there is a useful 5 minutes tip section on the cull. This is a technique which is used more than once on the DVD and he has some helpful things to say. As a double DVD in some ways I was quite surprised by how few effects are taught. But they are all strong effects and worth the time devoted to them.

Are they all Sensations?

I really enjoyed Sensations. Boris has a quite different performing style from many magicians working today – he often takes his time and slows things down (some of the routines are nearly 10 minutes long in performance) and I appreciate that more gentle pace. The DVD includes plenty of live performances with only one (or two?) studio ones. I always think this gives you a better sense of the ‘feel’ of a trick.

Explanations are clear with plenty of detail and the whole DVD is produced to BBM’s usual high standards.

I’m still not sure that I understand the link to ‘sensations’ – it feels like a concept album where the concept isn’t really there. But the strength of the effects shines through regardless. You may not use all of these, but I can almost guarantee that one or two will find their way into your repertoire. If you appreciate strong, direct card magic then you can’t afford to miss this one. I’m also looking forward to getting stuck into his other recent release on the Boris Wild Marked deck later in the year.

You can pick up your copy of Sensations direct from BBM (who kindly supplied the review copy) for only £26.99