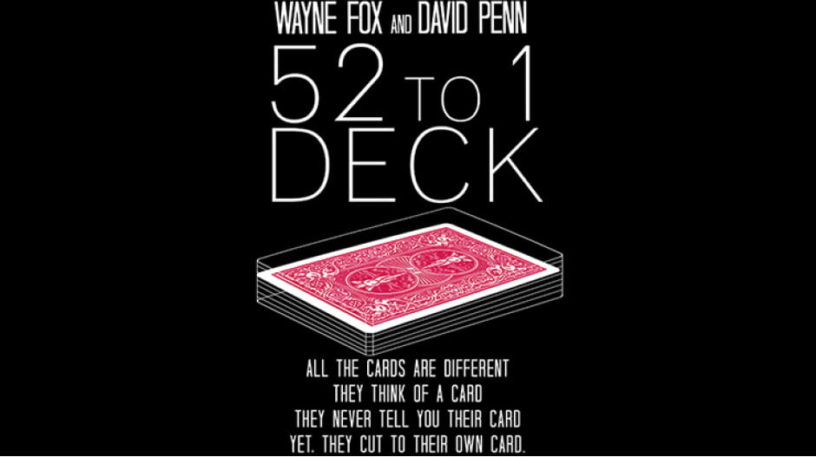 When the 52to1 Deck first arrived it caused quite a splash, so I’ve been looking forward to getting a chance to put it through its paces for this review. Let’s dive straight in.

The effect can be described succinctly – which is often the sign of a strong trick. You show a spectator a deck of cards – they merely think of a card from the deck – and you then cut to it. It is that direct. And you don’t do it once, but three times on the trot. With different cards. And the last time, the spectator cuts to the card themselves!

I’ll be honest, magic doesn’t come much stronger than this. What superpowers do you require to perform such a miracle? The good news is that there is no sleight of hand to speak of. You receive a very cleverly gaffed deck and it relies on a bit of psychology/spectator management. But you’ll be doing this one very quickly I would think.

As already mentioned, the 52to1 Deck is a fairly heavily gaffed deck. It can, nonetheless, be handled pretty freely. But it does most of the work for you. A few extra cards are supplied to use for various alternative presentations (for example if you want to go for a straight prediction effect).

You also get a link to an online instructional video. Although I find the WorldMagicShop titles a bit over the top, the filming and explanation is clear. There are some full live performances which is also very helpful. On the other hand, as someone wanting to learn the effect, it was slightly frustrating to have to sit through 11 minutes of performance before you get to the setup and explanation. 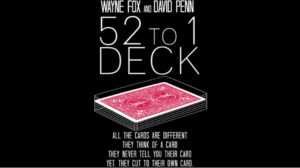 We never want to tip methods on this site, but suffice to say that the 52to1 Deck builds on several well-established methods (which are widely credited on the explanation), woven together in a brilliant way. The download lasts about 1 hour and 10 minutes and includes some ideas for different performance contexts (e.g. a platform or parlour show) and also a video showing you the order of the deck.
There’s a small amount of preparation involved, but it you’ll do it in less than 5 minutes.

This is a great release. Strong, strong magic, which is well within the reach of all abilities of magician. Yes, the deck is a one trick pony, but this pony is worth having in your pocket at all times. It is a small sacrifice of pocket space for such a strong effect. It resets instantly. A real worker.