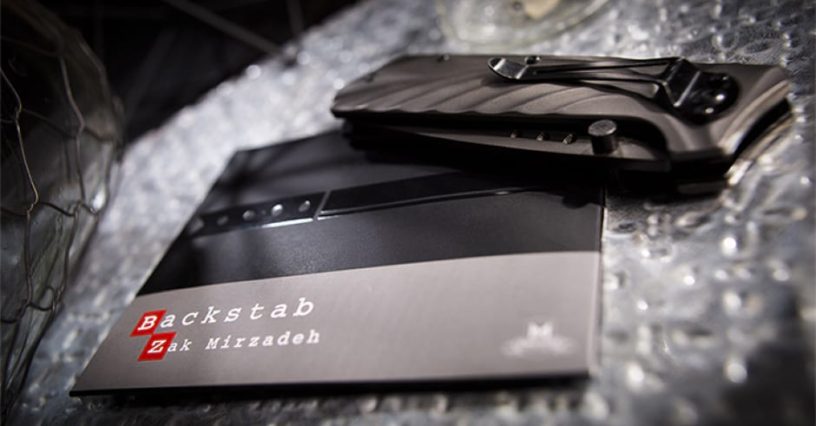 Backstab is an intriguing new version of the classic card-stabbing idea. But more than that the principle involved has a number of ways it can be used so you might want to look at this even if you’re not the sort of person who usually carries a pocket knife. Read on to see our review…

The basic Backstab effect plays like this. The spectator chooses a card which is lost in the deck. The performer takes out his pocket knife and stabs the deck – lifting up all the cards above the chosen card. So it is a card location using a knife.

The nature of the gimmick means a few variations are possible. For example – you can use it as an example of dead-stabbing (OK – I just made that term up – like dead-cutting!) – so you can stab a “freely chosen” number of cards. Or you could do a kind of ACAAN with a knife – where you stab to the chosen card at the chosen number. The spectator could do the stabbing and locate a previously predicted card. All these are taught on the video.

The video also mentions how you could use the gimmick (without a knife) and cause a chosen card to vanish from the deck and appear somewhere else. Unless I blinked, the ‘vanish’ wasn’t actually explained. But if you can’t work that out then you really shouldn’t be performing magic…

Backstab comes with the special gimmicks – made in red Bicycle stock. Also some spare materials for you to make some more gimmicks or alter the existing ones. And a link to an online tutorial. 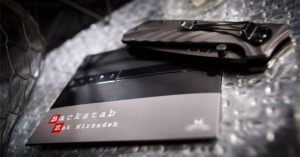 The tutorial runs for about 1 hour 15 minutes – and to my mind could have been at least 20 minutes shorter. Things feel to be slightly over-explained. But that could be me.

And some of this time is taken up with the multiple safety warnings – which is a good idea for a trick with such a potentially dangerous element. All the routines are explained clearly and also how to repair or customise your gimmicks.

This is a difficult one for me to review in the sense that I would never perform with a knife in my close up set. That may be a character/temperament/culture thing – but there it is. However if you are comfortable using a knife then this is a clever idea which would not be very difficult to perform.

It’s good that it comes with ready-made gimmicks – but the nature of the effect means these will have to be replaced periodically. You may want to buy a couple of copies at the outset if you are likely to use this regularly.

I’m also intrigued by the other non-knife possibilities with the gimmick. I don’t want to say more for risk of exposure, but with a little bit of thought I can see how it could have a number of potential applications in card magic. The gimmick could sit in your deck and not get in the way too much with other card routines.

So Backstab is a solid release. It’s a dramatic effect – and as such suitable to be a closer. It’s pretty easy to do. If you’re comfortable performing with a pocket-knife then it is well worth a look.

You can pick up Backstab from MagicShop.co.uk for £27.99 (at the time of writing).