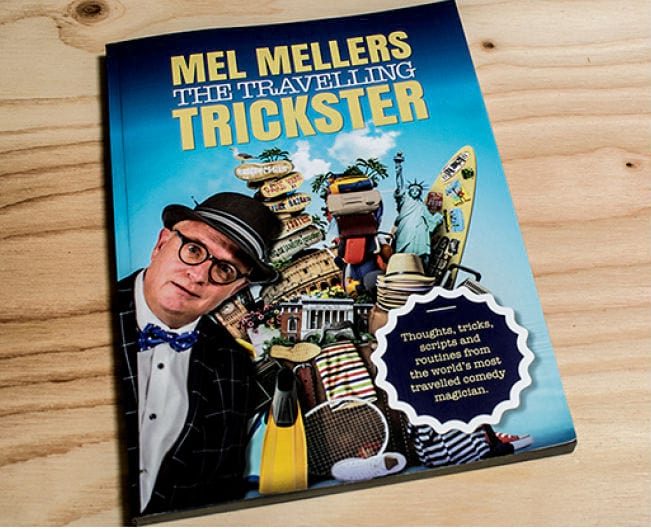 The Travelling Trickster is so good that I seriously considered not writing the review, so that no one else would know about the great material in it. The book describes itself as “Thoughts, tricks, scripts and routines from the world’s most travelled comedy magician.” And whilst I have no idea if that last bit is true, it is a great description of what the book is all about.

If you don’t know who Mel Mellers is – then where have you been? (Check out his other material here.) He is an extremely talented and hilariously funny magician. And The Travelling Trickster demonstrates that he is also really thoughtful about his magic too.

The tone is set immediately by a series of amusing forewords – including one by Houdini! It is followed by a brief biographical sketch, and then it’s straight in to the magic – and what a lot of that there is. 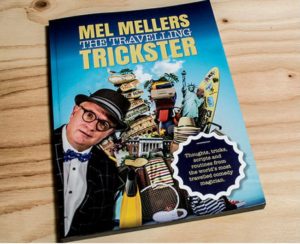 In slightly  fewer than 150 lavishly illustrated pages (great job on production Phil Shaw and MagicSeen ) there is an absolute wealth of magic.

Many of Mel’s signature routines are here, along with some you may not have come across before. Most of them have detailed (and hilarious) scripts that go with them.

I suspect that there is one of the potential problems with the book. The scripts are so good that any readers will be tempted to lift them and use them as is. But they are so crafted to Mel’s unique personality that I have a feeling they wouldn’t work so well if anyone else tried them.

To help temper that, the book also contains much wisdom on topics like creativity and writing comedy – which will help to equip you to come up with your own ideas. But I fear many won’t bother.

I’m not going to go through the routines blow by blow – suffice to say there is so much strong magic here. Much of the magic has a mental theme – but other genres are included too. One of the things I particularly admire is the way Mel can take a classic prop or trick and find a completely new take on it. This is one of the signs that a real craftsman is at work – you can see the thought (and experience) that has gone in to all of this wonderful material.

There are ideas for those working with children in addition to more ‘general’ routines – much of it pitched in the cabaret or stage arena. And of course some fantastic mentalism.

The Travelling Trickster had me laughing out loud as I read it on more than one occasion – Mel’s wicked sense of humour comes across even in his descriptions of the effects. Since it was such fun, I read it fairly quickly, and already think there are several routines I would like to take and make my own. And I suspect that if I read it again I’ll find some more.

Although these sort of phrases are often bandied about in reviews, I really do think there would be something for every kind of stage worker in here (not really for the close-upper – though even they would pick up some great insights on things like misdirection and scripting etc.).

I would highly recommend this for anyone who loves their art and wants to add to their stage act.  You can pick up The Travelling Trickster from MagicShop.co.uk for £49.99 (at the time of writing) – and I would say it is worth every penny.