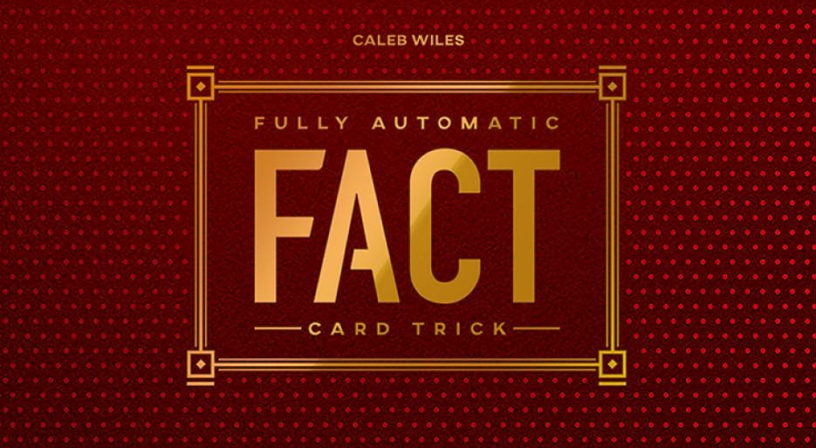 Caleb Wiles is one sneaky thinker! His Fully Automatic Card Trick is exactly what it says it is. So let’s take a closer look in our review.

What is the Fully Automatic Card Trick?

The best way to answer that is to watch Caleb’s brilliant performance on Penn & Teller Fool Us. For your viewing pleasure I have included the video here.

If you can’t be bothered to watch the video, the routine is one in which the spectator does all the work. Cutting, shuffling, dealing, etc. And yet amazingly a card which is selected in an extremely fair-looking manner is not only located, but then shown to have been predicted in advance in several killer ways. It’s a very strong routine which will play for a good 5 or 6 minutes. The routine taught is just fractionally different from the one on Penn & Teller – but not in a way which changes the overall impact of the effect.

You get a very clever deck of cards, some extra cards which will allow you a degree of customisation, and a link to a 35 minute online explanation. In fact, amusingly, my review copy didn’t come with the link. Whilst I know this is a Fully Automatic Card Trick, I did think that some explanation would be helpful! Thankfully the kind people at Murphy’s Magic put me straight! The whole thing comes neatly packaged in an attractive cardboard box.

The explanation is simply shot – just Caleb at a card table talking you through it. We often talk about the merits of live v. studio performances. Well in this instance, the performance takes place in your own room, since he essentially walks you through what to do with your deck. Unfortunately, because of the way USPCC print decks, you have to reverse the order of your deck before you try to follow his explanation. I twigged that because of previous (similar) items I have looked at – but if you do it straight out of the box it won’t quite work!

There are many excellent features of this routine. You end essentially clean. And he even suggests a method for being able to carry on to other routines with a normal deck. That is sweet.

It really is self-working – in the sense that if you carry through the instructions it will all play as expected. However, it is worth saying that you WILL need to practise this. You will need to be completely confident with the procedure, and without tipping the method, there are one or two things you will need to keep your eye on while the spectator is handling the cards.

None of this is in any sense deal-breaking. But I would definitely urge you to really familiarise yourself with this before you try it out for real – don’t assume because it is ‘self-working’ that you can do it without any practise. You wouldn’t, would you?

As has been mentioned, you end clean. But if you wanted to perform the effect again (not that you would – to the same crowd) you would need to go through a significant reset. Not complicated, but significant – not the sort of thing you could carry out in the middle of gigging. In fact if you wanted to use this as part of your performing set, I would probably suggest setting up several decks – with different reveals.

It wouldn’t be suitable for general walkaround since it really requires a table for the various displays. I think this would be ideal for a formal close up show or a special occasion. Or as a nice party-piece when you have folk round to dinner!

The explanation is clear and straightforward, and I really appreciate the extra cards they have supplied to enable you to customise the effect to some degree.

So all in all we think this is a great trick. The performing conditions are the biggest limitation – but if it fits the context in which you perform we would suggest this is a great buy.

You can pick up the Fully Automatic Card Trick from the Merchant of Magic for £26.99 (at the time of writing).