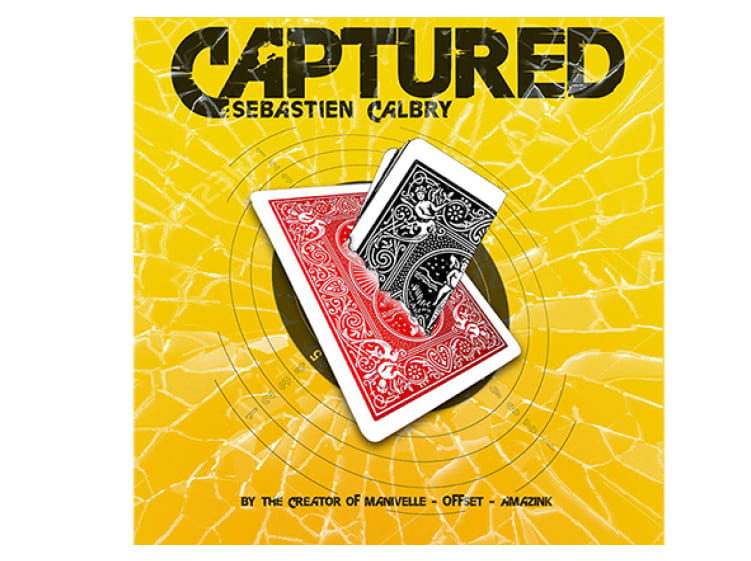 Captured is the first item I have reviewed by Sebastien Calbry. It is an interesting and visual card effect but not without its problems – as you will see as you read on.

I hadn’t seen a trailer or heard anything about Captured – and I watched the first 5 mins of the online teaching and still had no idea what the effect was! However, it all became clear, and here is my summary.

A card is chosen and returned face down in the pack. The top (indifferent) card is turned face down and a folded card appears printed on its face. Visually you ‘pull’ the printed card off and it is the selected card.

You receive a very cleverly constructed gimmick and a link to a roughly 31 min instructional video. The teacher is French – so after some initial words (for which there are subtitles in English) most of the video is silent simply showing you the moves. I say silent, but in fact there is some slightly annoying background music running all the way through.

The editing of the subtitles (and on-screen section titles) is poor – with a number of errors in the English.

This is a really difficult one to call. Here’s the good. The visuals of pulling the folded card off the face card are beautiful. It looks great. The gimmick arrives ready made – no craft work here. 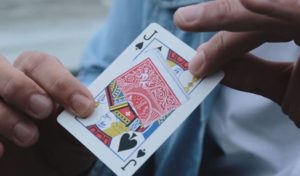 However, I’m struggling with the whole concept. Why would a card appear as a ‘picture’ on another card? And most spectators are unlikely to be familiar with a folded playing card – you’d have to work hard at the spectator understanding it was just a ‘picture’ of a folded card and not an actual folded card. And that would potentially involve showing the whole set up closer than I would be comfortable doing.

There is an easy and a ‘Pro’ handling. The latter allows you to do the whole thing with a signed card. But if you weren’t careful, the magical effect may just be of the chosen card suddenly folding itself up and jumping to the top of the deck – rather than the effect of a picture coming to life.

It all feels a bit muddled to me. Why should a card appear as a ‘picture’?

The final 10 minutes of the teaching explain how to make your own Captured gimmick – and some of the necessary material is supplied with the trick. So I suppose you could take the concept and apply it to something else – where the ‘picture’ is more obvious or makes more sense.

Although the teaching is visual only it is very clear. The operation of the gimmick is obvious and easy. If you’re doing the ‘pro’ version this will require (as you’ve no doubt guessed) a Mercury Card Fold – and this is taught reasonably clearly. There are plenty of other resources for this widely used move if you struggle to follow.

I have a bit of a love hate relationship with this kind of gimmick. It is very clever and allows great visuals. But I would always be nervous about it breaking in performance. Perhaps this falls in the category of an effect ideal for your show reel rather than the real world. But even in a show reel I think my comments about the logic of the routine would apply.

I think you can see which way I’m blowing on this one. And the thing that pushes me over the edge is that it is quite expensive for a one off gimmick – albeit one which is ready assembled. I think my preferred route would be to make up the gimmick is something other than a playing card and make a whole new routine.

You can pick up Captured from MagicShop.co.uk in either red-backed or blue-backed bicycle cards for £30.99 (at the time of writing).