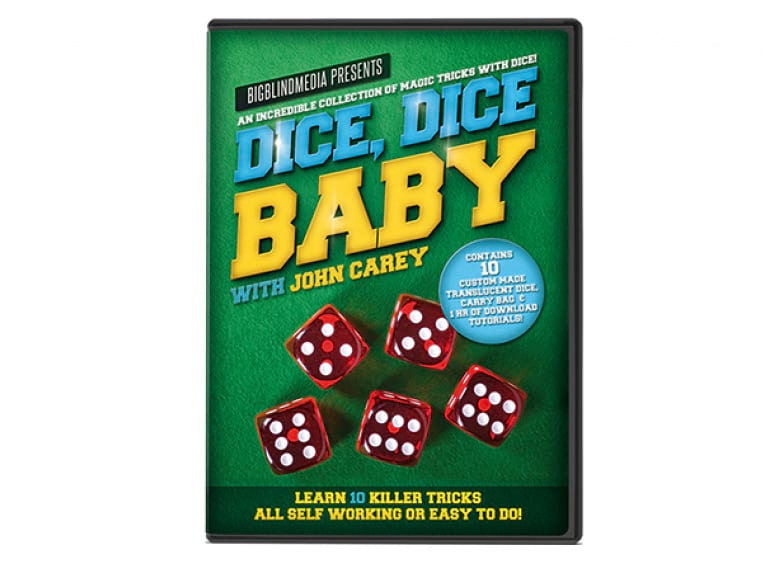 Included in the release are a set of 10 coloured dice – all you need to perform the 10 routines on project. They come in a nice draw-string bag and there is an online teaching video which runs to 1 hour and 8 minutes.

Let’s take you through the routines.

Dicewave – I really like this take on the classic B’wave effect but using dice. If you’ve done a bit of mentalism before there’ll be no real surprises in method – but I love the presentational hook of ‘fading away’ – can’t say more without spoiling the way the props somehow ‘sell’ the effect and make it bigger in your mind. Practical, portable, neat.

Hot Roddy – this, you might have guessed, is based on another classic – the hot rod. But somehow ‘constructing’ the ‘rod’ on the fly seems to make it even more impossible. You will have your own opinion on the strength and weaknesses of the Hot Rod force. But from my perspective, the odds are in your favour of a decent outcome!

Translocation Dice – three fly with dice? Three translucent dice travel one by one to join a red dice in your other hand. With a kicker ending. This requires some elementary sleight of hand, but it is not what you’d call a knuckle buster. The sleights are briefly but adequately explained. A pleasing quicky. Does really need a table.

Perfect Six – this is another ingenious variation on a principle I’ve seen before with cards – but given a whole new lease of life with dice. The spectator makes all the choices and yet a 6-way (!) prediction is shown to be perfectly correct. Cheeky, subtle and satisfying. Just how I like my magic.

Evoque Dice – again nothing startlingly new here. But I love the combination of equivoque and dice and the strong prediction which is produced. You’ll need to work hard on your wording to make this as strong as it could be, but John helps you out with this.

Homing Dice – a fun fooler with three dice based on a card trick of a similar name! You keep placing the dice in your hands and removing dice, but a red die keeps turning up. This is another one that requires basic sleight of hand – but I think dice are easier than coins with this one!

Covert Prediction – a card is chosen on the basis of the roll of three dice, and it is found to match your ‘lucky’ card. It’s a bit like Diception but with an ordinary deck. For my money this is one of the weaker effects on the release. But I’d need to give it some road-testing to be certain since I may be thinking too much like a magician!

Clearly Wild – three dice change colour one by one – and then instantly change back to their original colour. The effect is clear, the moves are simple (this mainly relies on the same move as Homing Dice – so if you can get it down you’ve got two tricks for the price of one). Another nice quickie and you end clean.

Hummeresque – the effect is that you reveal a dice the spectator is merely thinking of from a choice of 6. This requires a bit of boldness and some verbal subtlety. You’ll probably need to do this a few times to really get it into your system, but it is a strong effect.

Gadabout Dice – a red dice keeps on jumping back to your hand to join two others – and then finally all three disappear. This is the classic ‘one in the pocket’ but with dice. A simple and pleasing routine.

You will probably have detected my bias towards mental magic in this review. All 6 are good and 2 or 3 of them are particularly strong. The more ‘sleight of hand’ based routines are also pleasing. I am fascinated by the way changing the prop changes the feel of ‘classic’ effects.

People are familiar with dice – and they are pleasing to look at and to handle. So I think the props will help to connect nicely with the audience – and also lead to a number of presentational angles. 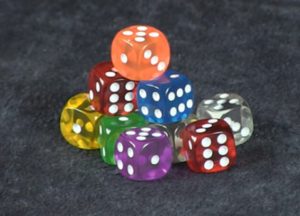 Other positives are the small amount of pocket space needed and that they make a nice alternative to card magic (not that there’s anything wrong with card magic!)

Personally, I would have liked straight edged ‘casino’ style dice – but you could easily replace them if you do too. And the supplied dice are of good quality and have the same translucent appeal.

There’s not much more to say. Dice Dice Baby contains some really strong routines, none of which require a great deal of (if any) sleight of hand. In other words, they’ve nailed it again. A great release.

Pick it up from Big Blind Media (who kindly supplied the review copy) for £21.99 (at the time of writing).