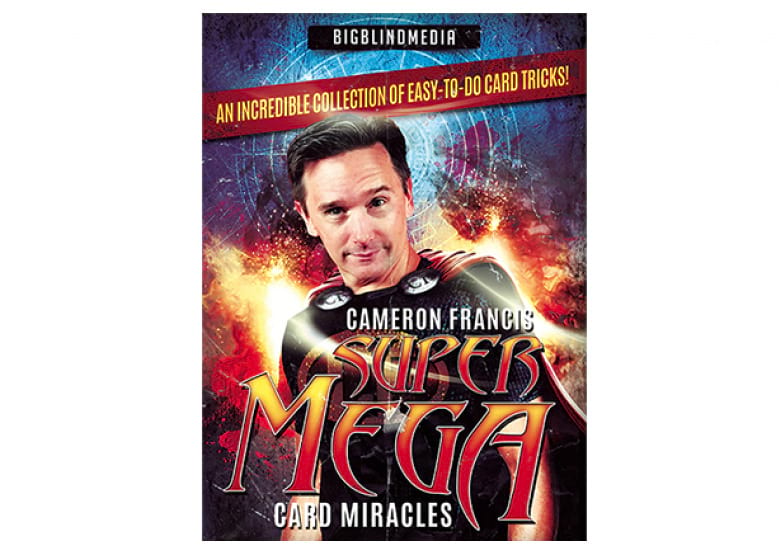 Super Mega Card Miracles is the latest understated title from Cameron (!) featuring his best versions of some of his favourite effects. Let’s go straight into…

Dedoner
I missed what the effect was first time because I was so amused by the idea of Cameron performing to himself! You’ll have to watch it to see what I mean! This is a kind of triumph meets colour changing deck card location. A strong effect with only basic card handling. Neato!

Collins Thing
Think ‘4 Ace Trick’ but with the kings. But instead of the Kings coming together in one packet, they all disappear in slightly different ways from their packets. And then they are found again in an increasingly more surprising way – the final one appearing in the card case. Minimal set up (you can probably guess what that is!) and pretty easy to do – if you know the most common packet trick count. Beautifully structured, I really like this and will try to keep it in my repertoire.

Switch Jack II
Two cards are chosen and replaced in the deck. Two jacks are placed under the card case, the other two ‘catch’ cards from the deck. The first ‘catch’ is the first selection. But the second is the other two jacks. When the card case is lifted, there is the second selection. A brain frying miracle 😊 Love the silliness incorporated into the explanation. You guys rock!

Thanks to Walton
A clever impromptu packet trick where you show 4 red cards and 4 black cards. The black cards are inserted into the red packet one at a time and keep changing colour to red. And in a final kicker four of the cards turn into the aces. This is a neat trick with lots of magic which is fairly easy to do – but you’ll need to work a bit to remember the order of the moves. I think that some spectators might need a little help remembering which packet is which – so clear signalling/presentation required. But a great effect. And it sets you up nicely for…

Precursor
This is the cousin of a 4 Ace trick, where each individual ace performs a different ‘effect’ before all instantly gathering together with the Ace of Spades. A typically whimsical presentation from Cameron and fairly easy to do if you have any familiarity with packet tricks. These two routines do flow really nicely and give you a great impromptu set.

Easy Hof
A card is chosen and lost in the deck. The four aces are used to identify the card. First spelling suit – and revealing the suit of the card. That ace is placed face down on the table. Then spelling value – at this point all the aces turn into the mates of the originally chosen card. And the tabled card turns into the selection. A fun routine with some moves – but not what we used to call finger-flinging!

The Super Mega Card Miracles keep coming – all on one DVD!

Mercury Card Load
So you’d guessed right? This is a way of loading a folded playing card into a playing card box (previously seen on his Murphy’s At the Table Lecture) Nice climax to a ambitious card routine or any other routine where you end up with a MCFed card! This kind of ‘impossible location’ is always powerful – and a big plus of this one is that no special props are needed – just practising a little move. Yet another reason to learn the Mercury Card Fold!

But Not Least
This is a triple card location (really a sandwich effect) where the Jokers do all the work – capturing the selections one by one – the final one turning first up on the way. There’s some really sneaky routining here which means that your work is done before they even know what the effect is. And oodles of misdirection for the only real move. This is top class Cameron.

Stand Up Christ Aces
The Four Aces are placed into the deck according to the spectator’s merest whim. Yet you can locate them in increasingly baffling ways. Nice use of an easy but fooling move from a Colombini routine. I’m running out of superlatives here – but again this is so neatly constructed – John Bannon would be proud. Great routine which you can do (as its name suggests) in the hands or at a table.

One flew over at my behest 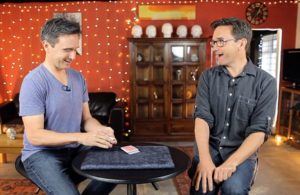 This is a card across effect where the spectator’s freely thought of card jumps from one half of the deck to the other half. Invisibly of course. It uses a clever Bannon Move from Mentalissimo (which is always a good start). Clear effect, easy to do. Not the biggest mystery on the selection, but worth watching the performance if only to enjoy the goofy spectator!

Collectors Item
This is a super-smooth collectors plot. Another Bannon move gets you so far ahead you wouldn’t believe it. Everything seems so fair – yet the three selections which have been shuffled into three separate packets all end up ‘caught’ by the four kings. Brilliant construction – not too difficult to do – worker!

Captivated
A packet trick with 4 Kings and 4 Aces. It starts off like a ‘twisting the aces’ effect – but then halfway through the Aces and Kings swap place – and then instantly the Aces sandwich the Kings between them. Think Paul Harris’ Reset with a twist. There’s some clever thinking here, but for some reason this one didn’t captivate me.

I’ve seen a lot of Cameron Francis’ work but I really do think that Super Mega Card Miracles is the best collection of his work to date. As I write, another BBM volume featuring Cameron has just arrived through the door – so watch this space to see if it is immediately superseded!

Although the effects aren’t self-working, none of them require really difficult moves and with only a small amount of practise would be within reach of any but the absolute beginner. I don’t want to keep repeating myself, but these routines all show the signs of having been worked over to the last detail – they are brilliantly constructed to maximise impact and minimise effort.

Super Mega Card Miracles comes highly recommended. You can pick it up from BBM (who kindly supplied the review copy) for £21.99. If you prefer a download that is available for £19.50.