Card Tricks, Close Up Magic, Review, Trick of the Month 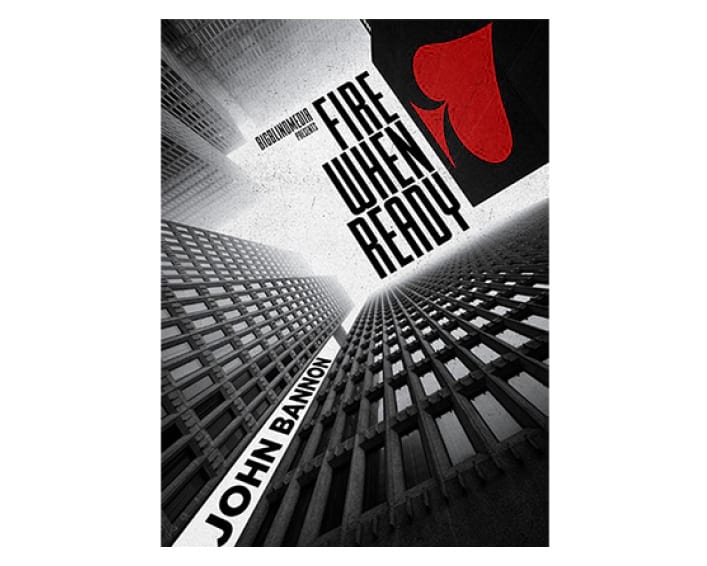 Fire When Ready completes the ‘Bullet Trilogy’ from the excellent John Bannon. But I approached it with some trepidation since I was a little disappointed with the most recent Bannon releases (Dealing with it Season 1 and Season 2). I’m pleased to say this feels like a real return to form. So let’s get straight into the tricks.

Proxy Shock
Shuffled deck. Spectator remembers a card from the deck which is then shuffled again – and then the performer commits to a card. When the spectator names their card – you may have a miracle on your hands immediately! But alternatively your incorrect selection will instantly change into their card. There are some clever things going on here, as you’d expect. It’s not technically difficult but requires some boldness in presentation. Which is just the way I like it!

Mundo
This (as you might have guessed if your Latin is any good!) is a sort of speedy (small packet) variation on OOTW. To a premise about intuition the spectator successfully separates the reds and blacks from a shuffled packet in a baffling way. I really like this too – a simple move which flies by turns this into a real miracle for the spectator. Brilliant.

Cut and Run
The spectator shuffles and cuts the deck yet with a few cuts you cut to the four Aces. This uses a sneaky procedure we’ve seen before in Bannon’s works – the Hybrid Holdout. Easy to do – pleasing quicky.

Stealth Aces
This is a super four ace-assembly. Although it uses a Bannon move it is actually a routine from the lovely and talented John Carey. As I watched it I spotted a discrepancy which I felt sure would be key to the trick – but that sneaky man got round it without me noticing! This was all the more annoying when I realised I had already read this effect in his Lucky booklet! I had forgotten how fabulous this is. It is so easy to do – the only ‘move’ flies by – and the magic seems to happen in an instant. Love it.

We’re still only half way! 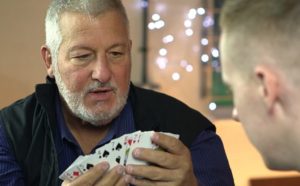 This is a rather more complex four ace trick after the last one. The three aces disappear from their packets and the fourth ace’s packet turns into four kings, then in an instant all the aces are back in their packets. This requires a little more handling but is still not difficult to do. As I was watching this I felt like I’d seen this before. Because I had! It was in his Lucky booklet and earlier on the Bullet Party DVD.

Blues Alley Jokers
A card is selected and somehow finds itself sandwiched between two other cards in a surprising way. This one does require a slightly more complicated technique – but with a little practise you should get the hang of it. For me, this was an underwhelming sandwich effect, but you might like it more than me. James Went adds some helpful explanatory commentary on this one.

Clean out of sight
This is a devastatingly clever routine where the spectator merely thinks about a card in a freely shuffled packet – then after testing their intuition you are able to locate their card effortlessly. This is a little bit procedural, but the premise wraps up an old principle in wonderfully new clothes.

Question Zero
A spectator chooses five cards, remembers one of them, shuffles her packet which is then returned to the deck. Yet you find it instantly. Uses the move you’ve already learnt for Blues Alley Jokers!

Line of Sight
This is essentially a card revelation framed in a nice way which relies on a humble glimpse. I love the premise and several different glimpses are taught – which is a useful one for your toolbag. This is another of the routines on the DVD which has been around for a while (it was originally in Dear Mr Fantasy) – but since the earlier publication is hard to find these days this may bring it to a whole new audience.

As I said at the beginning, Fire When Read feels like a real return to form. There are some superb effects on here, the majority of which require no complicated sleight of hand but rather rely on subtlety and clever structuring. If you don’t get at least three workable effects out of this I would be amazed.

One small criticism of pretty much any Bannon DVDs is that there are never any ‘live’ performances. Everything is done in the studio. Some are performed to ‘real’ people, and some with no audience at all. There are advantages to this approach – since sound and video quality is guaranteed. But sometimes I long to see the effects performed for real people in the wild. But that’s a really minor criticism.

I would have liked a bit more discussion with Bannon on the theory side of things – since I always enjoy his thinking. But at the end of the day this is full of good, solid tricks. I’ll be coming back to this DVD to work several of these into my impromptu set. Highly recommended.

You can pick up Fire When Ready direct from BBM (who kindly supplied the review copy) for £21.99. If you’re happy with a download, this is slightly cheaper at The Merchant of Magic (£19.99).