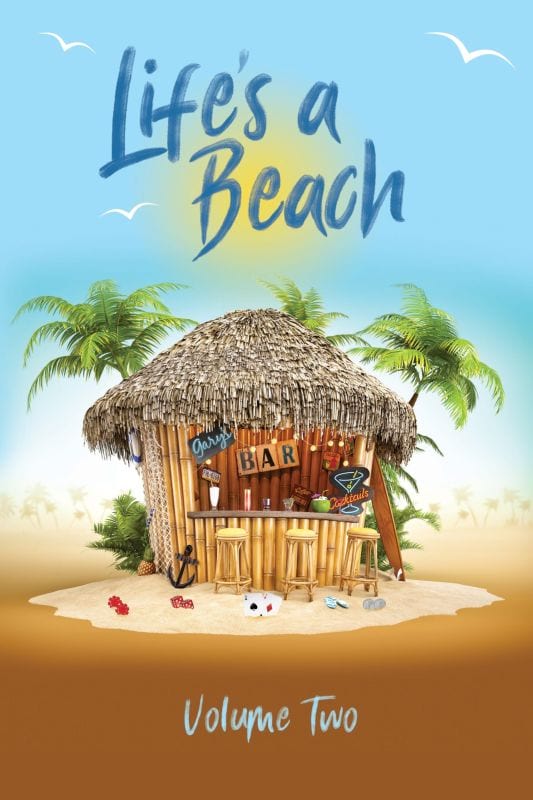 It doesn’t seem that long since we look at Life’s a Beach Vol 1 – but given how strong the material in that book was I was very excited to get my hands on Vol 2. So let’s get on with the review!

After a down-to-earth foreword by Gary’s good friend Mark Bendell (and by the way if you still haven’t seen The Unknown – you really must – it is brilliant!) and a brief encouragement from Gary to actually try the things out (!) we get straight into the tricks.

First up is a cracking self-worker called B’Waver. If you can imagine B’Wave plus card to impossible location you’ve got the idea. And it’s so easy to do. Great start!

Crazy Card Trick is basically a chance for Gary to show off how many ways he can show four cards to be the same card! After two cards are selected and lost in the deck, four cards constantly change into different cards – including the selections – which then vanish and reappear in the card box. This is worth studying just for the individual sequences even if you don’t like the routine. Which you should, because it’s a good one!

Pocket Aces involves the four Aces jumping around and ending up in the spectator’s pocket. You’ll need to be confident with palming for this one, but it makes a nice change from some of the more common four ace plots.

Thoughts is a somewhat ballsy mentalism effect where a card the spectator names a card and it is the one you have placed on the table in front of them. Gary’s given some thought to outs so you can give this a go. You know you want to!

Card in Balloon does exactly what it says on the tin. It reminds me of a routine I used to perform years ago (though the method is completely different!) – and there really is something very appealing about a chosen card appearing in this way. You have the drama of the balloon popping combined with a very visual appearance. Worth a look.

Mystery Card 2.0 is a no gimmick version of the mystery card effect. Briefly – a card is reversed in the face up deck. The spectator chooses (and signs if they wish) a card which is then lost in the deck. When the deck is spread the face down ‘mystery card’ is found to be the spectator’s selection. This is really strong – and I love the cheeky method for getting everything into the right place. Excellent effect. Gary says he uses this as an intro to his Ambitious Card and I imagine that is a great way to do it.

Back Palm Thank you Mam. Apart from having an excellent title, this trick utilises one of the few more flourishy moves I ever got round to putting the effort in to learning. Can you guess which one from the title? Two cards are selected and lost in the deck. An indifferent card is removed from the deck – it vanishes – and then reappears in your hand changing into the first selection. This card then vanishes and reappears turning into the second selection. And if you want an optional kicker both cards can then re-appear in your pocket. That seems like overkill to me – but then I haven’t tried it in front of real people yet. Another nice plot.

At this point I realise that if I’m going to describe every effect in the book this is going to be a long very long review indeed. So I’m going to give you some selected highlights followed by some final thoughts…

Gary’s in depth understanding of misdirection is on display in a number of effects (notably Card under Glass and Pocket to Pocket) and you will learn lots about constructing your routines to take the heat off your moves if you pay attention here.

Did we mention Gary’s bold methods? Vanishing Point is a super sandwich effect which requires a certain amount of Chutzpah!

One of the few non-card items in the book – Exact Change 2.0 – is also one of my favourites. A prediction routine where you predict the exact change from your spectator’s imaginary trip to the sweet shop.

Coins Predicted has possibly the least exciting title in the book but is a really commercial effect with an engaging hook. It includes a script by Christopher Williams who has provided some great scripts for a couple of the routines in the book – well written and effective.

Iphone 20 shows Gary’s knack for coming up with fun plots which are a bit different and also very commercial. This involves a spectator’s signed selection merging with an ‘iphone’ playing card.

Kickback Sandwich is a neat sandwich type effect with a merely thought of card and some built in comedy which also effectively enables the method. Great lateral thinking and a fun routine.

Rubik Revelation cashes in on all the interest in Rubik’s Cube magic at the moment and is a very straightforward and somewhat bold method of predicting the pattern on a cube the spectator has freely mixed.

Colour Diffusion is another fun effect where a small packet of cards change to all have different coloured backs. That is a very bald description – but the routine is nicely structured in a way which involves the audience really well and maxes out the psychological effect of the change. Oh, and did I mention It is dead easy to do?

Colour Remix is a great multi-phase oil and water routine using an idea I have never before seen (and I’ve seen a lot of oil and water effects over the years – though I may just have missed this idea) – where the red and black cards also have contrasting backs so that you can apparently tell from the front or the back whether the cards are mixed or not. A simple subtlety means this actually makes the routine much less sleight-heavy than most similar routines – and it also includes a multi-coloured backs finish. Neat.

Coin to Anywhere is an idea of pure cheek contributed by Chris Congreave. It enables you to vanish a borrowed and signed coin and have it appear anywhere – with precious little effort on your part. There’s a variation on this theme which might appeal to mentalists too…

And there’s loads more I haven’t even mentioned. Gary has a knack for coming up with direct plots or clever variations on existing plots. Some of the ideas might even stimulate your own creativity.

As before the book is packed with clear illustrations and also photos of Gary performing with amusing captions.

This is another fabulous release which will more than repay your investment of time and money studying it. I think performers at all levels will find multiple routines they can use here. They range from self-working effects to things which will require a bit more sleight of hand – but I would say that most things would be in the reach of most performers with a little bit of practise.

You can pick up Life’s a Beach Volume 2 direct from the publishers at MagicSeen for £25 (at the time of writing). I’m very grateful to Gary for supplying the review copy.