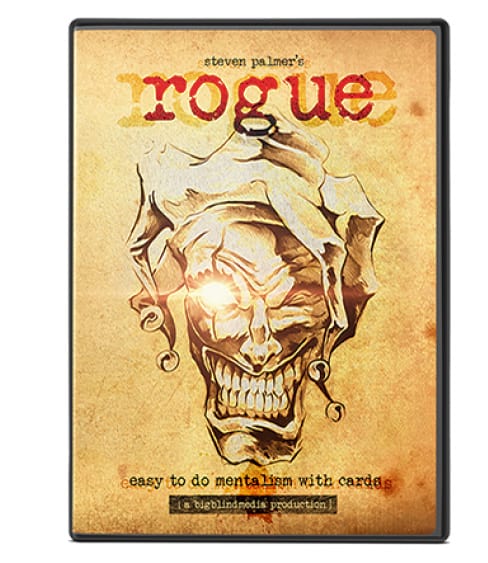 Rogue has been sitting on my review pile for woefully long. As you may have noticed, there’s been a bit of a delay in reviewing recently due to other pressures. However, Steven Palmer’s new (ish!!) DVD from Big Blind Media was well worth the wait. Let’s talk about the tricks first.

Deviant Shuffle
This isn’t a trick, but is rather a technique used in some of the routines. It is a sneaky combination of moves which allows the spectators to shuffle the deck whilst retaining a stock of cards. There are no ‘moves’ to speak of here and it does look pretty fair. Neato!

He also explains some subtleties on a breather crimp and a short card – both of which are underrated techniques which enable hands off miracles!

Void
This is a very convincing reveal of a card that the spectator is only thinking of. Quite a lot going on here and some clever subtleties. Two versions are taught – one is more ‘advanced’. As with many mentalism effects you will need some confidence in improvising around a script. But the techniques you need are not advanced and are clearly taught. A further variation is taught which works the opposite way round – which I can’t really explain without exposure!

Thought of Monte
Two spectators choose cards in a very fair way. Then you play a sort of two card monte game where the cards turn into the spectators’ selections in their hands. Did I mention you can do it with a borrowed shuffled deck?! This uses a lovely peek from Ollie Mealing which is fully explained and I’m sure you’ll use in other contexts too. And there’s another really nice utility move – a kind of switch. A neat little impromptu routine.

Villains and Heroes or possibly Heroes and Villains!
This is framed as a lie detector kind of test – where you pick up on the spectator’s tells to reveal their thought of card. The construction allows the spectator a lot of freedom and several free shuffles and yet you can still identify their card. Great effect. (The DVD titles give one name for this and Steven gives it the opposite name!)

Technically Missing
The spectator chooses a card and loses it in the deck. You not only find it again – but you also find its 3 mates. This looks so fair and the outcome is very surprising. Like many of the routines on the DVD this has lots of nice subtle convincers.

Memorabilia
This is another revelation of two merely thought of cards. For some reason this didn’t grab me as much as the other routines. And you’ll have to be prepared to do some verbal jazz to get to your successful result. But still very strong for a layperson. 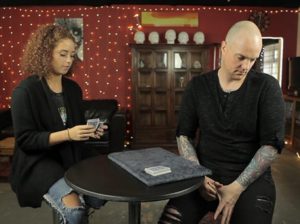 Out of my sight
Another routine based on Vernon’s classic Out of sight, out of mind. The spectator thinks of card and you reveal it! Again, you’ll need to be prepared to think on your feet to pull this off. But if you’re confident with the approach you’ll have another very strong routine.

Medley
This is a nicely constructed series of three revelations of a spectator’s chosen or thought of card under the theme of a gambling demonstration. The phases seem more and more impossible and very fair. Possibly my favourite on the DVD.

Deadcut
With the presentational hook of deadcutting, you manage to deadcut to a card that the spectator has earlier freely chosen and lost in the deck. One of the easiest effects on the DVD – and yet just as strong as any of the others. Really nice routine.

There is a lot to like about Rogue. BBM’s production values are always high and having Liam Montier in the saddle helps to make sure explanations are all very clear. I must admit to being amused by the ‘spooky mentalism background music’ – which is a bit of a break from BBM tradition!

Rogue is billed as ‘easy to do mentalism with cards’ – and I would just gently question the easy to do. It’s not that any of the routines require difficult sleights (although one of the peeking techniques taught does in my mind qualify as at least early intermediate) – but as with many mentalism effects you need a degree of confidence with your script to sell them. Not all the routines require this – and at least half are unquestionably ‘easy to do’ – but I would just put a tiny caveat on that label.

Another very personal reflection is that although I liked a lot of the effects, my main reaction to this DVD was to want to use the different elements and techniques taught here to come up with my own routines.

There’s a big in-house debate about mentalism and card magic and whether they should go together. But I think this DVD proves that you can do cracking mentalism with cards without any loss of integrity.

If you like strong mentalism then Rogue is definitely worth a look.

And you’ll be glad I waited so long to review this because it’s currently on offer for only £12.60 at the Merchant of Magic! (at the time of writing!)

Many thanks to BBM who kindly supplied the review copy.