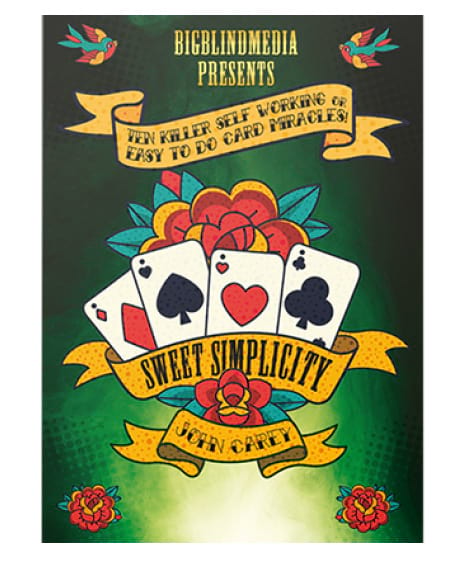 Sweet Simplicity is the latest in a number of John Carey releases we’ve reviewed here at Bicycle-Cards.co.uk.  There’s lots to like about this DVD from Big Blind Media full of straightforward close up (mainly card) magic.  Let’s get straight into the tricks…

John Carey is a bit of an equivoque fan – and this is essentially another take on the imaginary card plot using this technique.  I didn’t feel like there was anything particularly new here – but my opinion with equivoque is that the more different approaches you see the stronger your own personal technique becomes. And since this is a relatively short and direct process, it would be a good starting point for someone who hasn’t used this technique much before.

The Trick that can be explained

A nice prediction effect from a shuffled packet from a shuffled deck.  It’s a little like a small packet version of the classic Trick That Cannot Be Explained.  I’m not sure that John understands what a perfect number is – which is part of his patter for the trick!  But it is a cool little effect.  You’ll need to practise a bit to make sure you understand the procedure for the different outcomes – and some are definitely a little weaker than the others – but you don’t need to jazz in the way you would with its distant relative.

I really like this transposition effect.  Four red backed jokers and blue backed jokers, swap place one by one, and then suddenly jump back to the original position.  This is nicely routined so you get a lot of magic without needing too many moves.  I’ll be trying this one out.

This is a simple little effect where the spectator chooses a card and you can read their mind, show you’ve predicted it in multiple ways and then show the rest of the deck is made up of jokers.  I’m in two minds about this.  It almost feels like too many climaxes.  And the deck is obviously a one-trick pony.  But it’s dead easy to do – so if it appeals to you then do it!

This is a sort of pseudo sloppy riffle false shuffle.  Maybe that’s only me.  It looks surprisingly deceptive.  Worth a look.

This is a great take on the spectator cuts the aces premise.  They really do appear to have an enormous amount of freedom in shuffling and cutting but the clever construction means that this is really easy to do.  There is a small set up but it isn’t at all complicated.  I love the way the first phase covers the set up for the second in plain sight. And the second phase is cheeky beyond measure! Great routine.

Somewhere over the rainbow

This is an ace cutting routine with a surprise rainbow deck ending. As a magician watching this it is pretty easy to spot what’s going on, but performed with confidence this should fly past a spectator.  It works nicely with the Spectrum Deck.

A thought of card turns out to be the only one in the deck from a different coloured pack and with a big cross on it for good measure.  You’ll obviously need to set this up since you’ll need a special deck.  But it is easily made up.  Straightforward and surprising.  It seems to me that with an awkward spectator you could have a miss – which isn’t really covered – but with careful handling you’ll be fine.

This is probably my least favourite routine on the DVD.  It’s a slow motion small packet sandwich – if you can imagine such a thing.  It is essentially self-working, relying on the use of a down under deal.  As a magician it doesn’t feel very magical – but he certainly got a good reaction from his volunteer.  I suppose if you sell this right it does appear like the spectator has merely thought of their card so it does become more surprising.

One Thought, One Spell

Baldly, the spectator cuts to a card, that card is spelled from the top of the deck, and you have predicted the card arrived at.  The thing that makes this surprising is that the spectator fairly shuffles the deck beforehand!  There’s minor jazzing involved here but the system – which I’d not thought about in quite the same way – is quite flexible.  I’m not usually a great fan of spelling effects – but this is good.

As I said at the start there’s a lot to like here. Most of the effects are very direct and none require too much hard work on the part of the performer.  Carey’s performances are always somewhat understated – that’s his personality – so you have to work hard to imagine what these could be with a bit more va va voom!  But I think there are some strong effects here which you will certainly use.

You can pick up a copy of Sweet Simplicity direct from the guys at BBM for £21.99 (at the time of writing).  If you prefer a download, it is marginally cheaper at MagicShop.co.uk for £19.50.